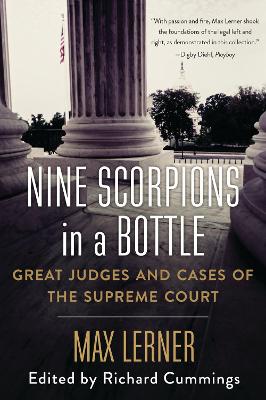 Nine Scorpions in a Bottle

Great Judges and Cases of the Supreme Court

Description - Nine Scorpions in a Bottle by Max Lerner

An eye-opening look by a renowned expert at one of the most important institutions in American democracy.
To many Americans, the United States Supreme Court continues to loom large as an unimpeachable symbol of the rule of law and the triumph of justice. But behind that towering facade there has been so much infighting, intrigue, and backstabbing that Justice Oliver Wendell Holmes Jr. reportedly once described the court as "nine scorpions in a bottle."
Nobody appreciated this more than Max Lerner, the acknowledged dean of Supreme Court observers. From the seminal articles he wrote for the Yale Law Journal in the 1930s to the New York Post columns that ran almost until his death in 1992, Lerner demystified the court and strove to uncover the historical, social, and psychological underpinnings of its landmark decisions. He believed in the majesty and the mystique it holds, but was clear-eyed about its human dimensions and moments of shame. Here are Lerner's celebrated portraits of John Marshall, Louis Brandeis, Felix Frankfurter, Hugo Black, Earl Warren, and of course Oliver Wendell Holmes Jr., whose judicial vision Lerner most respected. Here, too, are his timeless discussions of the cases that continue to shape American society, such as Brown v. Board of Education, US v. Nixon, and Roe v. Wade. With a new preface for this edition, Nine Scorpions in a Bottle follows Max Lerner's lifetime examination of the American way of law case by case, justice by justice, and will enrich every reader's understanding of the Supreme

Book Reviews - Nine Scorpions in a Bottle by Max Lerner

» Have you read this book? We'd like to know what you think about it - write a review about Nine Scorpions in a Bottle book by Max Lerner and you'll earn 50c in Boomerang Bucks loyalty dollars (you must be a Boomerang Books Account Holder - it's free to sign up and there are great benefits!)

Max Lerner is the author of, among many other works, America as a Civilization, The Unfinished Country, and Wrestling with the Angel. For the last twenty years of his life he wrote a highly respected, widely syndicated newspaper column. He died on June 5, 1992. Stephen Wermiel is professor of practice of constitutional law and associate director of the Summer Institute on Law and Government at American University Washington College of Law. He is coauthor of Justice Brennan: Liberal Champion.

A Preview for this title is currently not available.
More Books By Max Lerner
View All