With a new introduction by Professor Richard Bradford this edition takes a fresh look at one of the great works of the twentieth century. Orwell's classic dystopian fiction warns us of our future, and deals with issues that speak to multiple dangers faced by many nations today. Winston Smith is a member of 'the party' and subject to constant surveillance by the eyes of Big Brother, the ruler of the society. 'Newspeak' is designed to eradicate all political speech, 'Thoughtcrimes' are categorized as any thoughts of resistance or rebellion against any aspect of society, and the threat of despatch to 'Room 101' is a looming warning to all. Orwell explores the mechanics of totalitarianism revealing how control over the mass media allows the state to control all aspects of life, both the past and the future. Winston Smith's ordeal is such that as the cruel world closes around him and he tries to fight for justice, we feel his every breath as our own. AUTHOR: George Orwell, the pseudonym of Eric Arthur Blair, was born in Bengal, India, in 1903. He was educated at Eton, became a policeman in Burma but suffered and studied poverty. His great works, Animal Farm and Nineteen Eighty-Four, are a product of his hatred of totalitarianism. His legacy of writing and political thought is much admired today. 3 illustrations 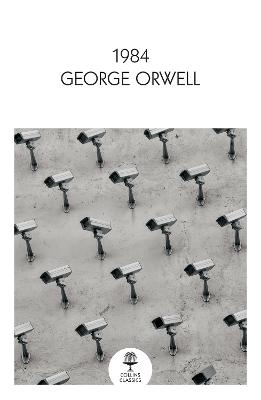