Ninth House: By the author of Shadow and Bone - now a Netflix Original Series

Description - Ninth House: By the author of Shadow and Bone - now a Netflix Original Series by Leigh Bardugo

The instant SUNDAY TIMES and NEW YORK TIMES bestseller, and Goodreads Choice Award winner, that Stephen King calls 'Impossible to put down' The mesmerising adult debut from Leigh Bardugo. A tale of power, privilege, dark magic and murder set among the Ivy League elite.Alex Stern is the most unlikely member of Yale's freshman class. A dropout and the sole survivor of a horrific, unsolved crime - the last thing she wants is to cause trouble. Not when Yale was supposed to be her fresh start. But a free ride to one of the world's most prestigious universities was bound to come with a catch.Alex has been tasked with monitoring the mysterious activities of Yale's secret societies - societies that have yielded some of the most famous and influential people in the world. Now there's a dead girl on campus and Alex seems to be the only person who won't accept the neat answer the police and campus administration have come up with for her murder.Because Alex knows the secret societies are far more sinister and extraordinary than anyone ever imagined.They tamper with forbidden magic. They raise the dead. And, sometimes, they prey on the living . . .'Ninth House is the best fantasy novel I've read in years, because it's about real people. Bardugo's imaginative reach is brilliant, and this story, full of shocks and twists, is impossible to put down' Stephen King'Ninth House is one of the best fantasy novels I've read in years. This book is brilliant, funny, raw and utterly magnificent - it's a portal to a world you'll never want to leave' Lev Grossman, bestselling author of The Magicians trilogy'Ninth House rocked my world. I could not get enough of Alex Stern, a heroine for the ages. With a bruised heart and bleeding knuckles, she risks death and damnation - again and again - for the people she cares about. I was cheering her on the whole way: from the first brilliant sentence of this book to the last' Joe Hill, bestselling author of N0S4A2

Other Editions - Ninth House: By the author of Shadow and Bone - now a Netflix Original Series by Leigh Bardugo 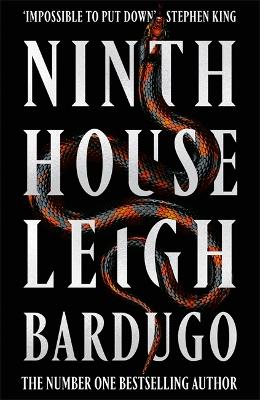 Book Reviews - Ninth House: By the author of Shadow and Bone - now a Netflix Original Series by Leigh Bardugo

» Have you read this book? We'd like to know what you think about it - write a review about Ninth House: By the author of Shadow and Bone - now a Netflix Original Series book by Leigh Bardugo and you'll earn 50c in Boomerang Bucks loyalty dollars (you must be a Boomerang Books Account Holder - it's free to sign up and there are great benefits!)