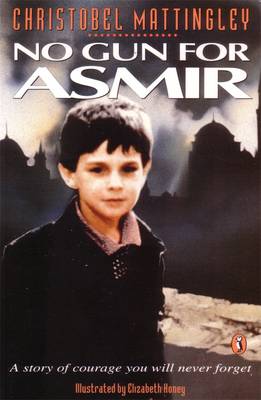 No Gun For Asmir

Description - No Gun For Asmir by Christobel Mattingley

War has come to Asmir's home in Sarajevo. He is torn from his father, his home and everything he has known. He becomes a refugee. This is a story of courage you will never forget.

Book Reviews - No Gun For Asmir by Christobel Mattingley

» Have you read this book? We'd like to know what you think about it - write a review about No Gun For Asmir book by Christobel Mattingley and you'll earn 50c in Boomerang Bucks loyalty dollars (you must be a Boomerang Books Account Holder - it's free to sign up and there are great benefits!)

Christobel Mattingley has been writing since she was eight years old and had her first pieces published in the children's pages of magazines and newspapers. Her first book, The Picnic Dog, was published in 1970, when she had three young children. While they were growing up she worked as a librarian in schools and in a teachers' college. She has been self-employed as a writer since 1974 and has travelled widely in Australia and overseas, speaking in schools and libraries. Christobel Mattingley has published over 30 books for children. Some of her works have been translated into other languages, have won various awards in Australia and the USA, and have been made into films for ABC Television. For most of the 1980s she worked with Aboriginal people and researched the history Survival in Our Land. In 1990 she received the Advance Australia Award for Service to Literature, and in 1996 she was made a Member of the Order of Australia for service to literature, particularly children's literature, and for community service through her commitment to social and cultural issues. No Gun for Asmir received a High Commendation in the Australian Human Rights Awards of 1994.