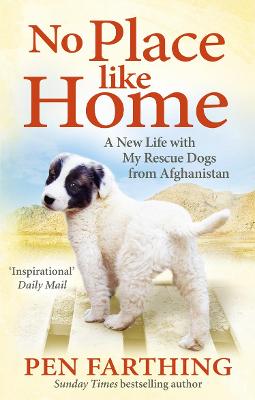 A New Beginning with the Dogs of Afghanistan

When Pen Farthing brought two dogs home from his tour of Afghanistan, little did he know what he had begun. Twelve months later, he has left the Marines, after 20 years service, to run his charity full time. But he barely has a chance to miss life in action, as he is inundated with requests from marines and soldiers to give more rescued dogs the chance of a new life in the West.Whether it's little Helmand, Fubar or Beardog - or the unruly litter known as the Char Badmashis or Four Hooligans - Pen does his upmost to give these dogs the chance they deserve. It is a frustrating and sometimes dangerous process, and while some dogs make it out to safety, others, tragically, do not. But a look out the window to see his own Afghan hounds, Now Zad and Tali, with bright eyes and glossy coats tells him it's all worthwhile.Like his Sunday Times bestseller One Dog at a Time, No Place Like Home is the story of one man's courage and persistence in the face of often insurmountable odds. It will warm - and break - the hearts of dog lovers everywhere.

Other Editions - No Place Like Home by Pen Farthing Book Reviews - No Place Like Home by Pen Farthing

» Have you read this book? We'd like to know what you think about it - write a review about No Place Like Home book by Pen Farthing and you'll earn 50c in Boomerang Bucks loyalty dollars (you must be a Boomerang Books Account Holder - it's free to sign up and there are great benefits!)

A passion for the outdoors and a love of doing everything the hard way caused Pen Farthing to pop into a Royal Marine careers office one day aged 18 to take on the toughest infantry training in the world to earn the coveted Green Beret of the Commandos. His military career, which has included tours of Iraq and Afghanistan, lasted over twenty years. Since publication of the Sunday Times bestseller One Dog at a Time, Pen has left the Marines to run his charity Nowzad Dogs and - when time allows - an outdoor adventure company. Pen is married to Lisa and they share their home with five dogs.Pen Farthing has won The Dogs Trust Dog's Best Friend Award and the IFAW Pets and People Award. His dogs Nowzad and Tali were nominated for the Crufts Friends for Life Award. More details about Nowzad Dogs can be found at www.nowzaddogs.com.

A Preview for this title is currently not available.
More Books By Pen Farthing
View All