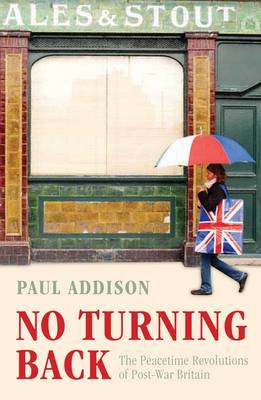 The Peacetime Revolutions of Post-War Britain

Description - No Turning Back by Paul Addison

In No Tunring Back, Paul Addison takes the long view, charting the changing character of British society since the end of the Second World War. As he shows, in this period a series of peacetime revolutions has completely transformed the country so that, with the advantage of a longer perspective, the comparative peace and growing prosperity of the second half of the twentieth century appear as more powerful solvents of settled ways of life than the Battle
of the Somme or the Blitz. This is not a story of progress pure and simple, it is a story of fundamental transformation in which much has been gained and much also lost, perhaps above
all a sense of the ties that used to bind people together. Paul Addison brings to it the personal point of view of someone who has lived through it all and seen the Britain of his youth turn into a very different country, but who in the final reckoning still prefers the present to the past.

Book Reviews - No Turning Back by Paul Addison

» Have you read this book? We'd like to know what you think about it - write a review about No Turning Back book by Paul Addison and you'll earn 50c in Boomerang Bucks loyalty dollars (you must be a Boomerang Books Account Holder - it's free to sign up and there are great benefits!)