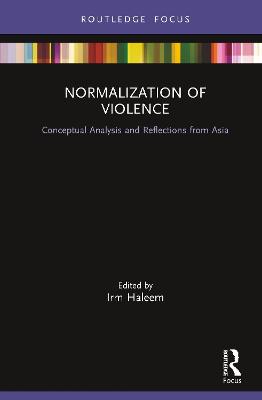 Normalization of Violence: Conceptual Analysis and Reflections from Asia

Description - Normalization of Violence: Conceptual Analysis and Reflections from Asia by Irm Haleem

This book offers both a conceptual and an empirical analysis of how violence is normalized. In its conceptual analysis, Irm Haleem offers a framework of explanation that she argues is universal in its narratives, which she submits is premised on moralizing, legalizing, and popularizing violence. Haleem engages Stathis Kalyvas's notion of the two stages of violence (process and outcome), and proposes the notion of "metaphysical" violence as distinct from physical violence. Through drawing upon works of scholars such as Hannah Arendt, Noam Chomsky, W.J.T. Mitchell, Michel Foucault, Jacques Derrida, George Kateb, and others, she illustrates why these distinctions (of stages and types of violence) are critical in understanding how violence is normalized.

In its empirical analysis, Naoko Kumada argues that the contemporary changes in narratives and educational curriculum in Japan are intended to moralize the historic glory days of imperial Japan, which, she argues, may subsequently normalize militarism. Stefanie Kam focuses on how China has normalized violence in Xinjiang through narratives of the imperatives of security, thereby both legalizing and moralizing violence. Jennifer Dhanaraj argues how the denial of citizenship to the Rohingya community in Myanmar has provided both the moral and legal justifications for Buddhist extremists and the military to wage a brutal and unbridled war against the Rohingyas. Finally, Abdul Basit examines how the ex-communication of the Ahmadi sectarian minority in Pakistan has criminalized the minority, thus paving the way for unbridled violence against them from extremist mobs that have justified their violence in moral and legal terms. In all the cases in this book, we see how violence is popularized as being either a matter of the will of the people, or as being for the greater good of the people.

» Have you read this book? We'd like to know what you think about it - write a review about Normalization of Violence: Conceptual Analysis and Reflections from Asia book by Irm Haleem and you'll earn 50c in Boomerang Bucks loyalty dollars (you must be a Boomerang Books Account Holder - it's free to sign up and there are great benefits!)


A Preview for this title is currently not available.
More Books By Irm Haleem
View All