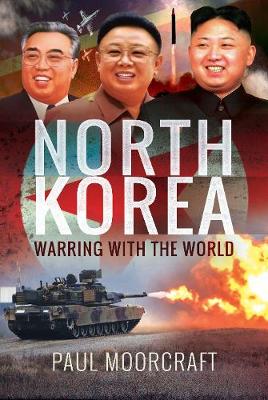 North Korea - Warring with the World

Description - North Korea - Warring with the World by Paul Moorcraft

Created in 1945 when Korea was partitioned, North Korea or the Democratic People's Republic of Korea remains the world's most secretive nation. Even the few permitted visitors are tightly monitored by minders, so accounts of those who have escaped are the main source of information on conditions within the country. What is not in doubt is the totalitarian control over the population exercised by the ruling dynasty. Kim Jong-un is the grandson of the first dictator Kim Il-sung. Until the development of a credible nuclear arsenal, it was possible to ignore North Korean posturing. But that is no longer an option as test firing proved that not only were other Asian nations directly threatened but the USA as well. While President Trump and Kim Jong-un met in Singapore in June 2018, there remains distrust and dangerous uncertainty. Professor Moorcraft is superbly qualified to trace the history of this small rogue nation that represents a major threat to world peace. He goes on to examine the political and military implications. AUTHOR: Professor Paul Moorcraft has frontline experience reporting on over 20 years, from A-Z, to Afghanistan to Zimbabwe, as a correspondent for print, radio and TV for nearly 40 years. He is currently Visiting Professor at Cardiff University and Director of the Centre for Foreign Policy Analysis, London. His published works include Axis of Evil (2005), Inside the Danger Zones (2010), The Rhodesian War (2011), Mugabe's War Machine (2011) Shooting the Messenger (2011), The Total Destruction of the Tamil Tigers (2012) , Omar al-Bashir and Africa's Longest War (2015), The Jihadist Threat (2017), Deadlines from the Front-line [2018] and Total Onslaught [2018]. He is also an award-winning novelist, and an author of books on crime and mathematics. 32 b/w illustrations

» Have you read this book? We'd like to know what you think about it - write a review about North Korea - Warring with the World book by Paul Moorcraft and you'll earn 50c in Boomerang Bucks loyalty dollars (you must be a Boomerang Books Account Holder - it's free to sign up and there are great benefits!)


A Preview for this title is currently not available.
More Books By Paul Moorcraft
View All

It Just Doesn't Add Up: Explaining Dyscalculia and Overcoming Number Problems for Children and Adults
$30.77 $34.19