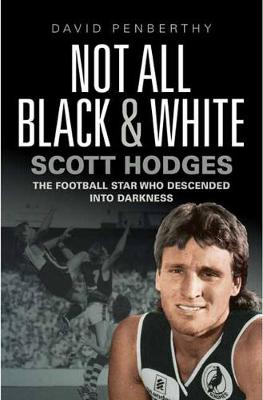 Not All Black and White

Scott Hodges' Life in Football and How It Almost Ended

Description - Not All Black and White by David Penberthy

On paper Scotty Hodges had it all.

In a football career almost without peer, Scott was drafted as a teenager to represent the team he loved, Port Adelaide, and would go on to win a staggering eight premierships.

He would break the State's all-time goal-kicking record, win its highest honour, the Magarey Medal, and be headhunted as the star forward in the inaugural Adelaide Crows AFL team. He had a beautiful wife, herself the daughter of football royalty, and two gorgeous young kids.

Behind all this his life was falling apart.

For years, Scott grappled with undiagnosed mental illness, sending him into a spiral of confusion and isolation, drug and alcohol abuse, anger and violence. He kept this secret from the world, and even began planning his own demise.

This is the gritty and raw account of how an ordinary man overcame extraordinary demons, and emerged the other side with a message of hope and survival.

Buy Not All Black and White by David Penberthy from Australia's Online Independent Bookstore, Boomerang Books.

Other Editions - Not All Black and White by David Penberthy Book Reviews - Not All Black and White by David Penberthy

» Have you read this book? We'd like to know what you think about it - write a review about Not All Black and White book by David Penberthy and you'll earn 50c in Boomerang Bucks loyalty dollars (you must be a Boomerang Books Account Holder - it's free to sign up and there are great benefits!)

David Penberthy has been a journalist and editor for more than 20 years. He started his career with The Adelaide Advertiser before moving to Canberra as the paper's national political editor from 1996 to 1999. He joined The Daily Telegraph in Sydney in 1999 as State bureau chief and was chief of staff and opinion editor before his appointment as editor of the newspaper from 2005 to 2008. He launched the opinion website The Punch in 2009 and was editor in chief of news.com.au from 2010 to 2012. He edited the Adelaide Sunday Mail in 2013 and moved to breakfast radio in 2014 with Adelaide's FiveAA. He has been a columnist for 15 years and writes two weekly columns for The Advertiser and News Corp's Sunday titles. He is married with three children.

A Preview for this title is currently not available.
More Books By David Penberthy
View All