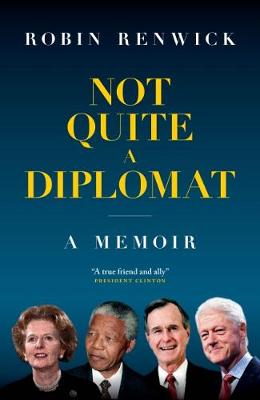 Not Quite A Diplomat: A Memoir

Description - Not Quite A Diplomat: A Memoir by Robin Renwick

Described as Mrs Thatcher's favourite diplomat, Robin Renwick was at the centre of events in the negotiations to end the Rhodesian War, in Washington during the Falklands conflict and played an integral part in in `Getting our money back' from the European Community. As ambassador in South Africa, he was credited by the Financial Times with having made a greater impact there than any British envoy since Lord Milner started the Boer War! The Guardian described him as having played a bridging role between the government and the ANC, having become a trusted personal friend of Nelson Mandela and of F.W. de Klerk. He also played a role in ending the Namibian War.

In Washington, where he became a confidant of George Bush senior, then of Bill Clinton, he was deemed to be an exceptionally influential British ambassador whose efforts were devoted to getting the US and its allies to take the actions needed to end the Bosnian War. His account contains vivid first-hand portraits of Mandela, Mugabe, George Bush Sr, the Clintons, Margaret Thatcher, Lord Carrington and many others. He examines why diplomacy too often consists of ineffective posturing, and the likely effects of Trump, Brexit and, potentially, Jeremy Corbyn on Britain's standing in the world.

Buy Not Quite A Diplomat: A Memoir by Robin Renwick from Australia's Online Independent Bookstore, Boomerang Books.

Book Reviews - Not Quite A Diplomat: A Memoir by Robin Renwick

» Have you read this book? We'd like to know what you think about it - write a review about Not Quite A Diplomat: A Memoir book by Robin Renwick and you'll earn 50c in Boomerang Bucks loyalty dollars (you must be a Boomerang Books Account Holder - it's free to sign up and there are great benefits!)


A Preview for this title is currently not available.
More Books By Robin Renwick
View All