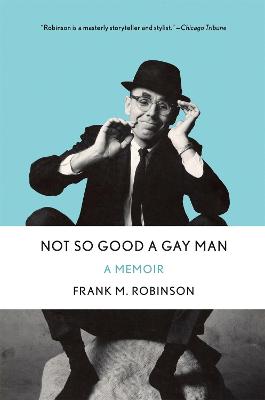 Not So Good a Gay Man

Description - Not So Good a Gay Man by Frank M. Robinson

Frank M. Robinson (1926-2014) accomplished a great deal in his long life, working in magazine publishing, including a stint for Playboy, and writing science fiction novels such as The Power, The Dark Beyond the Stars, and thrillers such as The Glass Inferno (filmed as The Towering Inferno). Robinson also passionately engaged in politics, fighting for gay rights, and most famously writing speeches for his good friend Harvey Milk in San Francisco.

This deeply personal autobiography explains the life of one gay man over eight decades in America and contains personal photos. By turns witty, charming, and poignant, this memoir grants insights into Robinson's work not just as a journalist and writer, but as a gay man navigating the often perilous social landscape of twentieth-century life in the United States. The bedrock sincerity and painful honesty with which he describes this life makes Not So Good a Gay Man compelling reading.

Book Reviews - Not So Good a Gay Man by Frank M. Robinson

» Have you read this book? We'd like to know what you think about it - write a review about Not So Good a Gay Man book by Frank M. Robinson and you'll earn 50c in Boomerang Bucks loyalty dollars (you must be a Boomerang Books Account Holder - it's free to sign up and there are great benefits!)

Frank M. Robinson (1926-2014) was a journalist and writer best known for his techno-thrillers and his work as a speech writer for Harvey Milk. He was the author of The Power and Waiting, as well as The Glass Inferno, the basis for the film The Towering Inferno. He was inducted into the Chicago Gay and Lesbian Hall of Fame in 2009.

A Preview for this title is currently not available.
More Books By Frank M. Robinson
View All