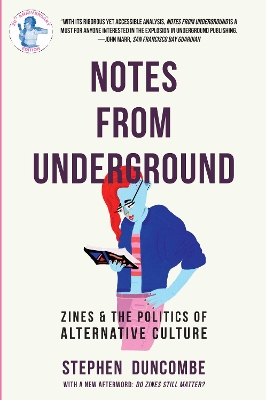 Much history and theory is uncovered here in the first comprehensive study of zine publishing. From their origins in early 20th century science fiction cults, their more proximate roots in '60s counter-culture, and their rapid proliferation in the wake of punk rock, Stephen Duncombe pays full due to the political importance of zines as a vital network of popular culture. He also analyses how zines measure up to their utopian and escapist outlook in achieving fundamental social change. Packed with extracts and illustrations, he provides a useful overview of the contemporary underground in all its splendour and misery.

Other Editions - Notes From Underground by Stephen Duncombe » Have you read this book? We'd like to know what you think about it - write a review about Notes From Underground book by Stephen Duncombe and you'll earn 50c in Boomerang Bucks loyalty dollars (you must be a Boomerang Books Account Holder - it's free to sign up and there are great benefits!)

Stephen Duncombe is an associate professor at New York University's Gallatin School in the department of Media, Culture and Communications and is a lifelong political activist. He is the author and editor of six books including Dream: Re-Imagining Progressive Politics in an Age of Fantasy, Notes From Underground: Zines and the Politics of Underground Culture, The Bobbed Haired Bandit: Crime and Celebrity in 1920s New York, Cultural Resistance Reader, White Riot: Punk Rock and the Politics of Race, and (Open) Utopia. He lives in New York City.

A Preview for this title is currently not available.
More Books By Stephen Duncombe
View All