Nothing But the Truth

Description - Nothing But the Truth by Vicky Pattison

NEW AND UPDATED EDITION, WITH ALL THE JUNGLE GOSSIPVicky Pattison was once best known as the outspoken, fiery star of the notorious reality show Geordie Shore. It took the challenging conditions and terrifying trials of the I'm a Celebrity jungle for the nation to see Vicky's true colours: brave, kind, a team-player and loyal friend - and mistress of the wicked one-liner! Millions of viewers fell in love with Vicky and it was no surprise when they crowned her their Queen of the Jungle in a landslide victory.Now, in her number one bestselling autobiography, Vicky takes us back to where it all began: to the loving family who have always had her back; to the showbiz daydreams of an ambitious little girl and to the outrageous adventures of an outgoing young women making her way in the world. With courageous honesty, Vicky reveals how she experienced the highs and lows of fame on Geordie Shore, how she hit rock bottom when a turbulent relationship fell apart and how she dug deep to turn her life around and come out fighting.And for the first time Queen Vicky shares her exclusive behind-the-scenes I'm a Celeb gossip and reveals all her exciting plans for the future.Think you know Vicky Pattison? It's time to read the truth, the whole truth and NOTHING BUT THE TRUTH.

Buy Nothing But the Truth by Vicky Pattison from Australia's Online Independent Bookstore, Boomerang Books.

Other Editions - Nothing But the Truth by Vicky Pattison 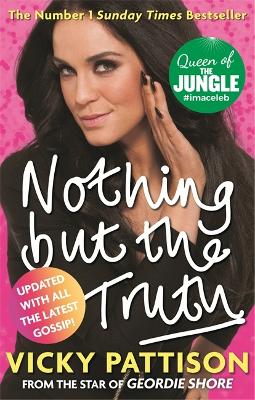 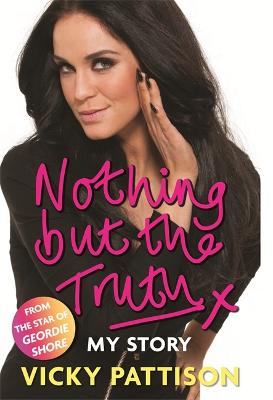 Book Reviews - Nothing But the Truth by Vicky Pattison

» Have you read this book? We'd like to know what you think about it - write a review about Nothing But the Truth book by Vicky Pattison and you'll earn 50c in Boomerang Bucks loyalty dollars (you must be a Boomerang Books Account Holder - it's free to sign up and there are great benefits!)

Vicky Pattison's autobiography, Nothing but the Truth, was a Number One Sunday Times bestseller in hardback and remained in the Top Ten for seven weeks. Vicky's first two novels, All that Glitters and A Christmas Kiss, received rave reviews from her fans who fell in love with the witty one-liners and snappy comebacks Vicky is renowned for. Her second non-fiction book, The Real Me, was a fully illustrated peek into Vicky's world that included recipes, exercise plans and all Vicky's top fashion and beauty tips. She discovered a new love of fitness and launched her own range of vitamins supplements called Mini V with phenomenal success and was boosted by her chart topping fitness DVD, Vicky's 7-Day Slim. In 2015, Vicky won the nation's hearts and was crowned Queen of the Jungle in I'm a Celebrity... Get Me Out of Here. Since then, Vicky has been a regular panellist on Loose Women as well as presenting the I'm a Celebrity spin-off show on ITV2. Vicky has also been named as a team captain for the new panel show Virtually Famous on E4. Vicky is a genuine Geordie Girl, born and bred in Newcastle. Her third novel, My Sister's Wedding, is out on 15th June 2017.

A Preview for this title is currently not available.
More Books By Vicky Pattison
View All