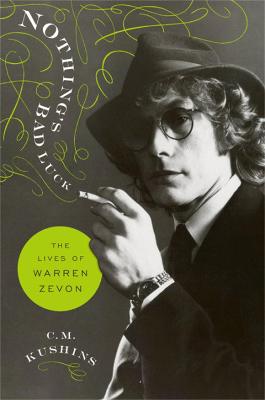 As is the case with so many musicians, the life of Warren Zevon was blessed with talent and opportunity yet also beset by tragedy and setbacks. Raised mostly by his mother with an occasional cameo from his gangster father, Warren had an affinity and talent for music at an early age. Taking to the piano and guitar almost instantly, he began imitating and soon creating songs at every opportunity. After an impromptu performance in the right place at the right time, a record deal landed on the lap of a teenager who was eager to set out on his own and make a name for himself. But of course, where fame is concerned, things are never quite so simple.Drawing on original interviews with those closest to Zevon, including Crystal Zevon, Jackson Browne, Mitch Albom, Danny Goldberg, Barney Hoskyns, and Merle Ginsberg, Nothing's Bad Luck tells the story of one of rock's greatest talents. Journalist C.M. Kushins not only examines Zevon's troubled personal life and sophisticated, ever-changing musical style, but emphasizes the moments in which the two are inseparable, and ultimately paints Zevon as a hot-headed, literary, compelling, musical genius worthy of the same tier as that of Bob Dylan and Neil Young.In Nothing's Bad Luck, Kushins at last gives Warren Zevon the serious, in-depth biographical treatment he deserves, making the life of this complex subject accessible to fans old and new for the very first time.

» Have you read this book? We'd like to know what you think about it - write a review about Nothing's Bad Luck: The Lives of Warren Zevon book by C. M. Kushins and you'll earn 50c in Boomerang Bucks loyalty dollars (you must be a Boomerang Books Account Holder - it's free to sign up and there are great benefits!)