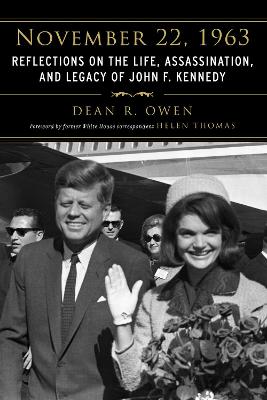 Reflections on the Life, Assassination, and Legacy of John F. Kennedy

As the fiftieth anniversary of President Kennedy's assassination draws near, the events of that fateful day will undoubtedly be on the minds of many throughout the world. Here Dean Owen curates a fascinating collection of interviews and thought-provoking commentaries from notable men and women connected to that notorious Friday afternoon. Those who worked closely with the president, civil rights leaders, celebrities, prominent journalists, and political allies are among the nearly one hundred voices asked to share their reflections on the significance of that day and the legacy left behind by John F. Kennedy. A few of the names include:
Tom Brokaw, a young reporter in Omaha in 1963
Andy Rooney, veteran television and radio newscaster
Letitia Baldrige, former Chief of Staff to First Lady Jacqueline Kennedy
Congressman John Lewis, sole survivor of the "Big Six" black leaders who met the president after the March on Washington in August of 1963
Cliff Robertson, Academy Award-winning actor who portrayed JFK in PT 109
Rev. Billy Graham, evangelist
With a compelling foreword from renowned author and journalist Helen Thomas, November 22, 1963 investigates not only where we were that day nearly fifty years ago, but where we have come since. A commemorative and insightful read, this book will unite generations.

» Have you read this book? We'd like to know what you think about it - write a review about November 22, 1963 book by Helen Thomas and you'll earn 50c in Boomerang Bucks loyalty dollars (you must be a Boomerang Books Account Holder - it's free to sign up and there are great benefits!)

Dean R. Owen is an award-winning journalist with more than thirty years of experience, including working as a reporter and editor in Washington covering Congress, the Supreme Court, and the White House. He was seven years old on Friday, November 22, 1963, and cites the events of that day as the catalyst for his professional career in journalism, public policy, and corporate communications. His work has appeared in the New York Times, Washington Post, and Wall Street Journal, among others. He resides in Seattle, WA. Helen Thomas (1920--2013) was the former chief White House Correspondent for the United Press International. The recipient of more than forty honorary degrees, she was honored in 1998 with the inaugural Helen Thomas Lifetime Achievement Award, established by the White House Correspondents' Association. She lived in Washington, D.C., where she wrote a syndicated column for Hearst from 2000 to 2010.

A Preview for this title is currently not available.
More Books By Helen Thomas
View All