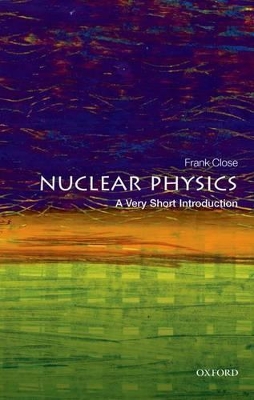 Nuclear physics began long before the identification of fundamental particles, with J. J. Thomson's discovery of the electron at the end of the 19th century, which implied the existence of a positive charge in the atom to make it neutral. In this Very Short Introduction Frank Close gives an account of how this area of physics has progressed, including the recognition of how heavy nuclei are built up in the cores of stars and in supernovae, the
identification of quarks and gluons, and the development of quantum chromodynamics (QCD). Exploring key concepts such as the stability of different configurations of protons and neutrons in nuclei, Frank Close shows how
nuclear physics brings the physics of the stars to Earth and provides us with important applications, particularly in medicine.ABOUT THE SERIES: The Very Short Introductions series from Oxford University Press contains hundreds of titles in almost every subject area. These pocket-sized books are the perfect way to get ahead in a new subject quickly. Our expert authors combine facts, analysis, perspective, new ideas, and enthusiasm to make interesting and
challenging topics highly readable.

» Have you read this book? We'd like to know what you think about it - write a review about Nuclear Physics: A Very Short Introduction book by Frank Close and you'll earn 50c in Boomerang Bucks loyalty dollars (you must be a Boomerang Books Account Holder - it's free to sign up and there are great benefits!)

Frank Close is Professor of Physics at Oxford University and a Fellow of Exeter College. He was formerly the Head of the Theoretical Physics Division at the Rutherford Appleton Laboratory, and Head of Communications and Public Education at CERN. He is the author of several books, including the best-selling Lucifer's Legacy (OUP, 2000), and was the winner of the Kelvin Medal of the Institute of Physics for his 'outstanding contributions to the public understanding of physics'. His other books include The Cosmic Onion (1983), The Particle Explosion (1987), End (1988), Too Hot to Handle (1991), and The Particle Odyssey (OUP, 2002). In 2013 Professor Close was awarded the Royal Society Michael Faraday Prize for Communication of Science.

A Preview for this title is currently not available.
More Books By Frank Close
View All