Crisis Behaviour and the Bomb

This edited volume explores competing perspectives on the impact of nuclear weapons proliferation on the South Asian security environment. The spread of nuclear weapons is one of the world's foremost security concerns. The effect of nuclear weapons on the behaviour of newly nuclear states, and the potential for future international crises, are of particular concern. As a region of burgeoning economic and political importance, South Asia offers a crucial test of proliferation's effects on the crisis behaviour of newly nuclear states. This volume creates a dialogue between scholars who believe that nuclear weapons have stabilized the subcontinent, and those who believe that nuclear weapons have made South Asia more conflict prone. It does so by pairing competing analyses of four major regional crises: the 1987 "Brasstacks" crisis, the Indo-Pakistani crisis of 1990, the 1999 Kargil war, which occurred after the nuclear tests; and the 2001--2 Indo-Pakistani militarized standoff. In addition, the volume explores the implications of the South Asian nuclear experience for potential new nuclear states such as North Korea and Iran.

Other Editions - Nuclear Proliferation in South Asia by Sumit Ganguly 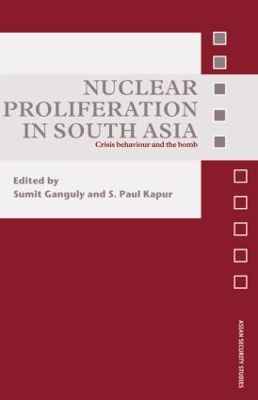 » Have you read this book? We'd like to know what you think about it - write a review about Nuclear Proliferation in South Asia book by Sumit Ganguly and you'll earn 50c in Boomerang Bucks loyalty dollars (you must be a Boomerang Books Account Holder - it's free to sign up and there are great benefits!)

Sumit Ganguly is a professor of political science, holds the Rabindranath Tagore Chair in Indian Cultures and Civilizations, and is director of research of the Center on American and Global Security at Indiana University, Bloomington. He is the author, co-author, editor or co-editor of 15 books on South Asia. S. Paul Kapur is associate professor in the Department of Strategic Research, U.S. Naval War College, and visiting professor at Stanford University's Center for International Security and Cooperation.