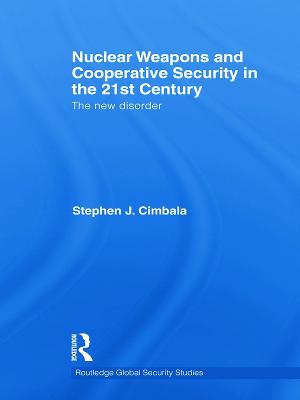 Nuclear Weapons and Cooperative Security in the 21st Century

This book looks at the prospects for international cooperation over nuclear weapons proliferation in the 21st century.

Nuclear weapons served as stabilizing forces during the Cold War, or the First Nuclear Age, on account of their capability for destruction, the fear that this created among politicians and publics, and the domination of the nuclear world order by two superpowers: the United States and the Soviet Union. The end of the Cold War, the dissolution of the Soviet Union, and the potential for nuclear weapons acquisition among revisionist states, or even non-state actors including terrorists, creates the possibility of a 'wolves eat dogs' phenomenon in the present century.

In the 21st century, three forces threaten to undo or weaken the long nuclear peace and fast-forward states into a new and more dangerous situation: the existence of large US and Russian nuclear weapons arsenals; the potential for new technologies, including missile defenses and long-range, precision conventional weapons, and a collapse or atrophy of the nuclear nonproliferation regime, and the opening of the door for nuclear weapons to spread among more than the currently acknowledged nuclear states.

This book explains how these three 'weakening' forces interact with one another and with US and Russian policy-making in order to create an environment of large possibilities for cooperative security - but also of considerable danger. Instead, the choices made by military planners and policy-makers will create an early twenty-first century story privileging nuclear stability or chaos. The US and Russia can, and should, make incremental progress in arms control and nonproliferation.

This book will be of much interest to students of nuclear proliferation and arms control, strategic studies, international security and IR in general.

Stephen J. Cimbala is Distinguished Professor of Political Science at Pennsylvania State University. He is the author of numerous works in the fields of international security, defense studies, nuclear arms control and other topics. He has consulted for various US government agencies and defense contractors.

Other Editions - Nuclear Weapons and Cooperative Security in the 21st Century by Stephen J. Cimbala 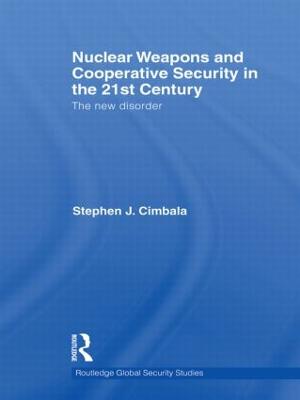 » Have you read this book? We'd like to know what you think about it - write a review about Nuclear Weapons and Cooperative Security in the 21st Century book by Stephen J. Cimbala and you'll earn 50c in Boomerang Bucks loyalty dollars (you must be a Boomerang Books Account Holder - it's free to sign up and there are great benefits!)

Stephen J. Cimbala is Distinguished Professor of Political Science at Pennsylvania State University. He is the author of numerous works in the fields of international security, defense studies, nuclear arms control and other topics. He has consulted for various US government agencies and defense contractors.