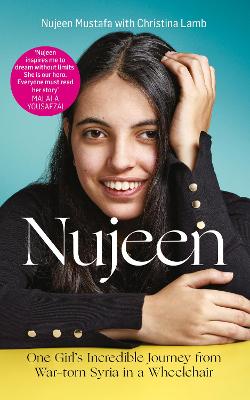 One Girl's Incredible Journey from War-Torn Syria in a Wheelchair

'She is our hero. Everyone must read her story. She will inspire you' Malala Yousafzai

An inspiring tale of a young disabled girl and her escape from the hell of war.

Nujeen Mustafa has cerebral palsy. This did not stop her travelling, with her sister, 4000 miles from Syria to Hungary in a wheelchair. Having taught herself to speak English by watching US soap-operas on Syrian TV, she made her way to the Hungarian border in the hope of asylum in Germany, where she has told her story, with Christina Lamb - bestselling co-author of 'I Am Malala'. A 16-year-old Syrian girl, she has the courage of a lion.

A strong, extraordinary voice, Nujeen tells the story of what it's really like to be a refugee, to have grown up through war and left a beloved homeland to become dependent on others. It tells how the Syrian war has destroyed a proud nation and torn families apart in the face of international indifference by leaders scarred by previous interventions, and the incredible bravery of a person determined to keep smiling. It is the story of our times told through one remarkable girl. 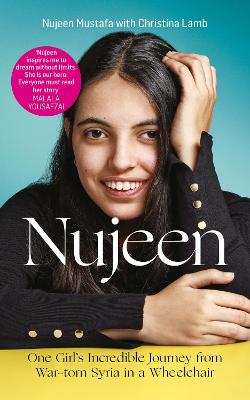 » Have you read this book? We'd like to know what you think about it - write a review about Nujeen book by Nujeen Mustafa and you'll earn 50c in Boomerang Bucks loyalty dollars (you must be a Boomerang Books Account Holder - it's free to sign up and there are great benefits!)

Born with cerebral palsy, 18-year-old Nujeen Mustafa has spent her life in a wheelchair. She had little formal education in Syria but taught herself English by watching US soap operas. In 2014 her home town of Kobane was at the centre of fierce fighting between Isis militants and US-backed Kurdish forces, forcing her family to flee first across the border into Turkey and then further into Europe, where they currently live, in Germany. Christina Lamb is one of Britain's leading foreign correspondents and a bestselling author. She has won 14 major awards including five times being named Foreign Correspondent of the Year and Europe's top war reporting prize, the Prix Bayeux. She is the author of numerous books including `Farewell Kabul', `The Africa House', `Waiting For Allah', `The Sewing Circles of Herat' and `House of Stone'. She co-wrote the international bestselling `I am Malala' with Malala Yousafzai and `Girl from Aleppo' with Nujeen Mustafa. She is a fellow of the Royal Geographical Society, an honorary fellow of University College, Oxford and was awarded an OBE by the Queen in 2013.