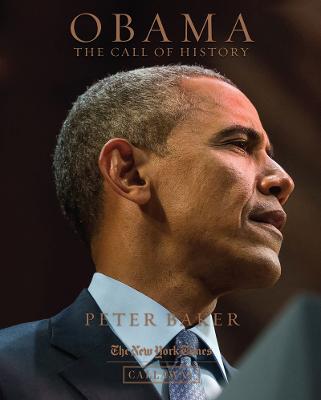 Obama: The Call of History

Description - Obama: The Call of History by Peter Baker

Peter Baker's authoritative history of the Obama presidency is the first complete account that will stand the test of time. Baker takes the measure of Obama's achievements and disappointments in office and brings into focus the real legacy of the man who, as he described himself, "doesn't look like all the presidents on the dollar bills."

With vivid color photographs by New York Times photographers and others of the events, major and minor, public and behind-the scenes, that defined Barack Obama's eight years in office, Obama: The Call of History is a portrait in full of America's first African-American president against the background of these tumultuous times.

Book Reviews - Obama: The Call of History by Peter Baker

» Have you read this book? We'd like to know what you think about it - write a review about Obama: The Call of History book by Peter Baker and you'll earn 50c in Boomerang Bucks loyalty dollars (you must be a Boomerang Books Account Holder - it's free to sign up and there are great benefits!)

As chief White House correspondent for the New York Times, Peter Baker covered the Obama presidency since its inception. He is the author of Days of Fire: Bush and Cheney in the White House, named one of the five best nonfiction books of 2013 by the New York Times Book Review and a Notable Book of the Year by the Washington Post; as well as The Breach: Inside the Impeachment and Trial of William Jefferson Clinton; and, with his wife, Susan Glaser, Kremlin Rising: Vladimir Putin's Russia and the End of the Revolution.

A Preview for this title is currently not available.
More Books By Peter Baker
View All