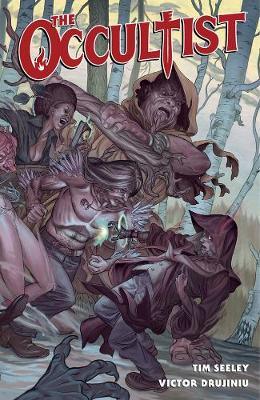 Description - The Occultist by Mike Richardson

Rob Bailey must balance responsibilities as a boyfriend, as a college student, and as the new wielder of the Sword, an ancient book of spells that has binded itself to him. With a team of hit mages hired by a powerful sorcerer after him, it's trial by fire for the new Occultist, as he learns to handle his powerful magical tome, or suffer at the hands of these deadly enemies. But as he fights for his life, our hero wonders whether he's wielding this enigmatic weapon, or if it's the one in control.

* From the mind of Dark Horse founder Mike Richardson (The Secret, Cut, The Mask)!

» Have you read this book? We'd like to know what you think about it - write a review about Occultist book by Mike Richardson and you'll earn 50c in Boomerang Bucks loyalty dollars (you must be a Boomerang Books Account Holder - it's free to sign up and there are great benefits!)

Tim Seeley is one of those slash people writer-slash-artist. He has drawn a number of different comic book series including G.I Joe, Halloween, WildC.A.T.s and Ex Sanguine. His writing work includes the New York Times best-selling Hack/Slash, Witchblade, Batman Eternal and the critically acclaimed Revival. He resides in Chicago, Illinois with his wife, Gina. He works at our Star Studios where he is never far from his 80s action figure collection. The author lives in Chicago, IL..