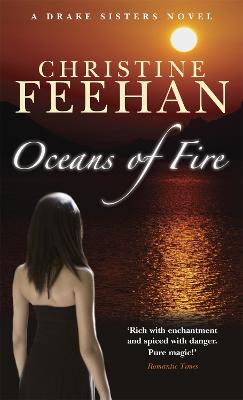 Seven sisters...and a legacy of magical secrets...As the third daughter in a magical bloodline, Abigail Drake was born with a mystical affinity for water, and possessed a particularly strong bond with dolphins. She spent her entire life studying them, learning from them, and swimming among them in the waters off her hometown of Sea Haven. Until the day Abby witnessed a cold-blooded murder on shore, and found herself fleeing for her life - right into the arms of Aleksandr Volstov. He's an Interpol agent on the trail of stolen Russian antiquities, a relentless man who gets what he goes after - and the man who broke Abby's heart. But he isn't going to let the only woman he ever loved be placed in harm's way - or slip away from his embrace...

Other Editions - Oceans Of Fire by Christine Feehan » Have you read this book? We'd like to know what you think about it - write a review about Oceans Of Fire book by Christine Feehan and you'll earn 50c in Boomerang Bucks loyalty dollars (you must be a Boomerang Books Account Holder - it's free to sign up and there are great benefits!)

NEW YORK TIMES bestselling author Christine Feehan has received numerous honours including being a nominee for the Romance Writers of America RITA and receiving a Career Achievement Award from ROMANTIC TIMES.

A Preview for this title is currently not available.
More Books By Christine Feehan
View All