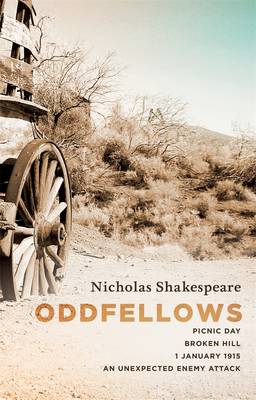 On 1 January 1915, ramifications from the First World War, raging half a world away, were felt in Broken Hill, Australia, when in a guerrilla-style military operation, four citizens were killed and seven wounded.

On 1 January 1915, ramifications from the First World War, raging half a world away, were felt in Broken Hill, Australia, when in a guerrilla-style military operation, four citizens were killed and seven wounded.

It was the annual picnic day in Broken Hill and a thousand citizens were dressed for fun when the only enemy attack to occur on Australian soil during World War I, took them by surprise. Nicholas Shakespeare has turned this little known piece of Australian history into a story for our time.

» Have you read this book? We'd like to know what you think about it - write a review about Oddfellows book by Nicholas Shakespeare and you'll earn 50c in Boomerang Bucks loyalty dollars (you must be a Boomerang Books Account Holder - it's free to sign up and there are great benefits!)

Nicholas Shakespeare was born in 1957. The son of a diplomat, much of his youth was spent in the Far East and South America. His novels have been translated into twenty languages. They include The Vision Of Elena Silves, winner of the Somerset Maugham Award, Snowleg and The Dancer Upstairs, which was chosen by the American Libraries Association in 1997 as the year's best novel, and in 2001 was made into a film of the same name by John Malkovich. Recent books include Secrets of the Sea and Priscilla. He is a fellow of the Royal Society of Literature. He is married with two sons and divides his time between Oxford and Tasmania.