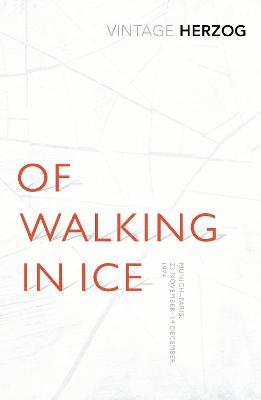 Of Walking In Ice

Description - Of Walking In Ice by Werner Herzog

A poetic meditation on life and death, by one of the most renowned and respected film-makers and intellectuals of our time.

In November 1974, when Werner Herzog was told that his mentor Lotte Eisner, the film-maker and critic, was dying in Paris, he set off to walk there from Munich, 'in full faith, believing that she would stay alive if I came on foot'. Along the way he recorded what he saw, how he felt, and what he experienced, from the physical discomfort of the journey to moments of rapture. It is a remarkable narrative - part pilgrimage, part meditation, and a confrontation between a great German Romantic imagination and the contemporary world. This edition of the book is being published for the first time as a classic piece of proto-psychogeography, to coincide with the fortieth anniversary of the legendary director's walk.

Other Editions - Of Walking In Ice by Werner Herzog 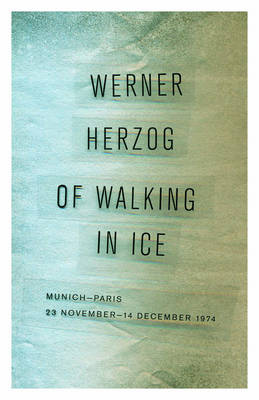 Book Reviews - Of Walking In Ice by Werner Herzog

» Have you read this book? We'd like to know what you think about it - write a review about Of Walking In Ice book by Werner Herzog and you'll earn 50c in Boomerang Bucks loyalty dollars (you must be a Boomerang Books Account Holder - it's free to sign up and there are great benefits!)

Werner Herzog was born in Munich on September 5, 1942. He grew up in a emote mountain village in Bavaria and studied History and German Literature in unich and Pittsburgh. e made his first film in 1961 at the age of 19. Since then he has produced, ritten, and directed more than fifty feature- and documentary films, such as GUIRRE, THE WRATH OF GOD (1972), NOSFERATU (1978), ITZCARRALDO (1982), LESSONS OF DARKNESS (1992), LITTLE DIETER EEDS TO FLY (1997), MY BEST FIEND (1999), INVINCIBLE (2000), RIZZLY MAN (2005), ENCOUNTERS AT THE END OF THE WORLD (2007) r CAVE OF FORGOTTEN DREAMS (2011). erner Herzog has published more than a dozen books of prose, and directed s many operas. erner Herzog lives in Munich and Los Angeles.

A Preview for this title is currently not available.
More Books By Werner Herzog
View All