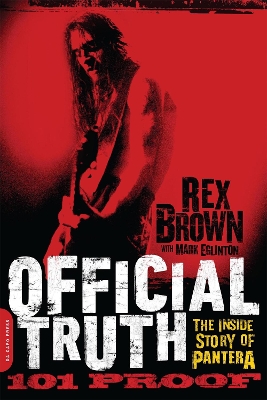 The Inside Story of Pantera

Few heavy metal acts survived the turmoil of the early 1990s music scene. Pantera, featuring the peerless guitar playing of the late "Dimebag" Darrell Abbott, was different. Instead of humouring the market, the band demanded that the audience come to them by releasing a series of fiercely uncompromising platinum albums, including Vulgar Display of Power and Far Beyond Driven - albums that sold millions of copies despite minimal airplay.This is the previously untold story behind one of the most influential bands in heavy metal history, written by the man best qualified to tell the truth about those incredible and often difficult years of fame, excess, and tragedy. » Have you read this book? We'd like to know what you think about it - write a review about Official Truth, 101 Proof book by Rex Brown and you'll earn 50c in Boomerang Bucks loyalty dollars (you must be a Boomerang Books Account Holder - it's free to sign up and there are great benefits!)

Rex Brown was born in 1964 in Graham, Texas. He joined Pantera in 1982 and has also played with Down. His new band, Kill Devil Hill, is climbing the charts.Facebook.com/RexBrownMark Eglinton is the author of James Hetfield: The Wolf At Metallica's Door. He divides his time between Scotland and the Pacific Northwest.mark-eglinton.com

A Preview for this title is currently not available.
More Books By Rex Brown
View All