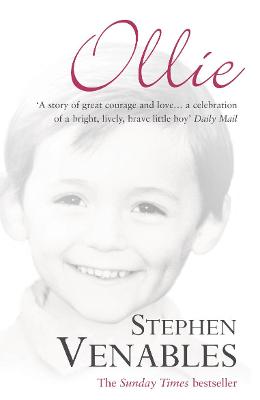 The True Story of a Brief and Courageous Life

The exceptionally moving, brilliantly written story of the brief, courageous life of Ollie, the autistic son of one of Britain's most successful mountaineers, and of his effect on all who knew him.

Like the swallows, our son Ollie came in the spring and left in the autumn. Dancing, singing, swooping - there was something birdlike about his energy, joy and laughter - but also the fleeting, enigmatic quality of his life.When he was two he lost all his speech, as autism turned his life - and ours - into a baffling challenge. Then at four he had to face a new challenge when he almost died from leukaemia. But chemotherapy worked its magic and he made a full recovery. He was a tough survivor and nothing seemed to dim his spirit- he could light up a room and energize everyone around him. So it was a huge shock, after several cancer-free years, when a fatal brain tumour was discovered. This time his body had had enough and he died very suddenly. He was twelve.Ollie had extraordinary courage and endurance. Time after time he bounced back, determined to enjoy life. He was obstinate, mischievous, playful, flirtatious, quixotic, funny. He generated - and continues to generate - huge amounts of laughter. And he was very beautiful. We always felt that if autism had not unravelled the wiring of his neural pathways, he would have achieved extraordinary things.This is the story of the journey we made with Ollie. Unlike a mountaineer, pursuing extreme experiences out of choice, he had difficulty thrust upon him- he was forced to be brave. For me, too, the journey was far more compelling than any expedition.

» Have you read this book? We'd like to know what you think about it - write a review about Ollie book by Stephen Venables and you'll earn 50c in Boomerang Bucks loyalty dollars (you must be a Boomerang Books Account Holder - it's free to sign up and there are great benefits!)

Stephen Venables is best known as the mountaineer who in 1988 became the first Briton to climb Everest without oxygen - one of many pioneering expeditions around the world. He began climbing while at Oxford in the early seventies, and has written eight books about his mountain travels, winning the Boardman Tasker Prize, the King Albert Medal and the Grand Award at Banff International Mountain Literature Festival. He has also appeared in several television documentaries and the IMAX movie, Shackleton's Antarctic Adventure. He lives in Bath with his wife Rosie and Ollie's brother Edmond.

A Preview for this title is currently not available.
More Books By Stephen Venables
View All

Upon that Mountain: The first autobiography of the legendary mountaineer Eric Shipton
$37.47 $41.63