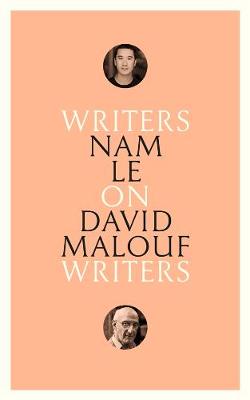 On David Malouf: Writers on Writers

Description - On David Malouf: Writers on Writers by Nam Le

A thrilling take on one of Australia's most acclaimed writers, David Malouf, which reveals much about literary craft while examining the complexities of the 'Australianness' of his work.

'Here was a very-much-alive half-Lebanese writer (from provincial Brisbane, no less) producing English-language writing of the very first order ... The poetry was in the prose; it stayed and sprung its rhythms, chorded its ideas, concentrated its images. Every other novel claims to be written in "poetic prose"; the real thing, when you come across it, is actually shocking.'

Nam Le takes the reader on a thrilling intellectual ride in this sharp, bold essay. Encompassing identity politics, metaphysics, the relationship between life and art, and the 'Australianness' of Malouf's work, it is unlike anything else written about one of Australia's most acclaimed writers.
In the Writers on Writers series, leading writers reflect on another Australian writer who has inspired and fascinated them. Provocative and crisp, these books start a fresh conversation between past and present, shed new light on the craft of writing, and introduce some intriguing and talented authors and their work.

Also in the Writers on Writers series

» Have you read this book? We'd like to know what you think about it - write a review about On David Malouf: Writers on Writers book by Nam Le and you'll earn 50c in Boomerang Bucks loyalty dollars (you must be a Boomerang Books Account Holder - it's free to sign up and there are great benefits!)