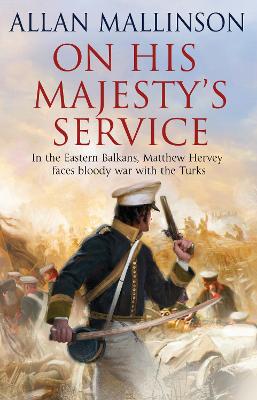 On His Majesty's Service

Description - On His Majesty's Service by Allan Mallinson

In the Eastern Balkans, Matthew Hervey faces bloody war with the Turks

January 1829- George IV is on the throne, Wellington is England's prime-minister, and snow is falling thickly on the London streets as Lieutenant-Colonel Matthew Hervey is summoned to the Horse Guards in the expectation of command of his regiment, the 6th Light Dragoons.But the benefits of long-term peace at home mean cuts in the army, and Hervey is told that the Sixth are to be reduced to a single squadron. With his long-term plans in disarray, he undertakes instead a six-month assignment as an observer with the Russian army, an undertaking at the personal request of the commander-in-chief, Lord Hill.Soon Hervey, his friend Edward Fairbrother and his faithful groom, Private Johnson, are sailing north to St Petersburg, and from there on to the Eastern Balkans, seat of the ferocious war between Russia and the Ottoman Empire. Hervey is meant to be an impartial spectator in the campaign, but soon the circumstances - and his own nature - propel him into a more active role. In the climactic Battle of Kulewtscha, in which more troops were engaged than in any battle since Waterloo, Hervey and Fairbrother find themselves in the thick of the action.For Hervey, the stakes have never been higher - or more personal.

Book Reviews - On His Majesty's Service by Allan Mallinson

» Have you read this book? We'd like to know what you think about it - write a review about On His Majesty's Service book by Allan Mallinson and you'll earn 50c in Boomerang Bucks loyalty dollars (you must be a Boomerang Books Account Holder - it's free to sign up and there are great benefits!)

Allan Mallinson is a former infantry and cavalry officer of thirty-five years' service worldwide. As well as the Matthew Hervey series of novels, he is the author of Light Dragoons, a history of four regiments of British Cavalry, one of which he commanded, and The Making of the British Army, a history of the Army's origins from the battle of Edgehill to the current conflict in Afghanistan. He also writes on defence matters for The Times, the Daily Telegraph and the Mail Online, and is a regular reviewer for The Times, Spectator and Literary Review. i>