and Other Psychological works

Description - On the Soul by Aristotle

'. . . the more honourable animals have been allotted a more honourable soul. . . 'What is the nature of the soul? It is this question that Aristotle sought to answer in De Anima (On the Soul). In doing so he offers a psychological theory that encompasses not only human beings but all living beings. Its basic thesis, that the soul is the form of an organic body, sets it in sharp contrast with both
Pre-Socratic physicalism and Platonic dualism. On the Soul contains Aristotle's definition of the soul, and his explanations of nutrition, perception, cognition, and animal self-motion. The general theory in De Anima is
augmented in the shorter works of Parva Naturalia, which deal with perception, memory and recollection, sleep and dreams, longevity, life-cycles, and psycho-physiology.This new translation brings together all of Aristotle's extant and complementary psychological works, and adds as a supplement ancient testimony concerning his lost writings dealing with the soul. The introduction by Fred D. Miller, Jr. explains the central place of the soul in Aristotle's natural science,
the unifying themes of his psychological theory, and his continuing relevance for modern philosophy and psychology.

Buy On the Soul by Aristotle from Australia's Online Independent Bookstore, Boomerang Books.

Other Editions - On the Soul by Aristotle 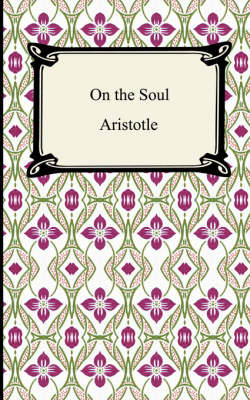 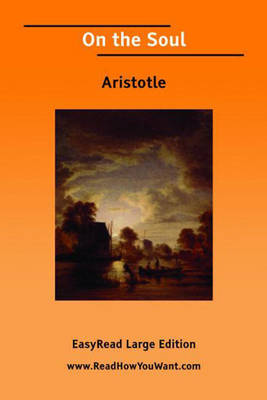 Book Reviews - On the Soul by Aristotle

» Have you read this book? We'd like to know what you think about it - write a review about On the Soul book by Aristotle and you'll earn 50c in Boomerang Bucks loyalty dollars (you must be a Boomerang Books Account Holder - it's free to sign up and there are great benefits!)