What is the nature of the modern state? How did it come into being
and what are the characteristics of this distinctive field of power
that has come to play such a central role in the shaping of all
spheres of social, political and economic life?

In this major work the great sociologist Pierre Bourdieu addresses
these fundamental questions. Modifying Max Weber?s famous
definition, Bourdieu defines the state in terms of the monopoly of
legitimate physical and symbolic violence, where the monopoly of
symbolic violence is the condition for the possession and exercise
of physical violence. The state can be reduced neither to an
apparatus of power in the service of dominant groups nor to a
neutral site where conflicting interests are played out: rather, it
constitutes the form of collective belief that structures the whole
of social life. The ?collective fiction? of the state
D a fiction with very real effects - is at the same time the
product of all struggles between different interests, what is at
stake in these struggles, and their very foundation.

While the question of the state runs through the whole of
Bourdieu?s work, it was never the subject of a book designed
to offer a unified theory. The lecture course presented here, to
which Bourdieu devoted three years of his teaching at the
College de France, fills this gap and provides the key that
brings together the whole of his research in this field. This text
also shows ?another Bourdieu?, both more concrete and
more pedagogic in that he presents his thinking in the process of
its development. While revealing the illusions of ?state
thought? designed to maintain belief in government being
oriented in principle to the common good, he shows himself equally
critical of an ?anti-institutional mood? that is all
too ready to reduce the construction of the bureaucratic apparatus
to the function of maintaining social order.

At a time when financial crisis is facilitating the hasty
dismantling of public services, with little regard for any notion
of popular sovereignty, this book offers the critical instruments
needed for a more lucid understanding of the wellsprings of
domination.

Buy On the State: Lectures at the College de France, 1989 - 1992 by Pierre Bourdieu from Australia's Online Independent Bookstore, Boomerang Books. 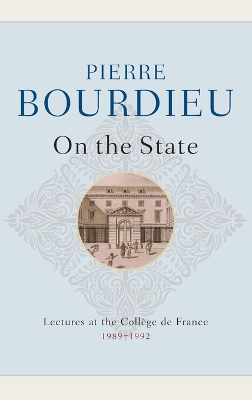 » Have you read this book? We'd like to know what you think about it - write a review about On the State: Lectures at the College de France, 1989 - 1992 book by Pierre Bourdieu and you'll earn 50c in Boomerang Bucks loyalty dollars (you must be a Boomerang Books Account Holder - it's free to sign up and there are great benefits!)