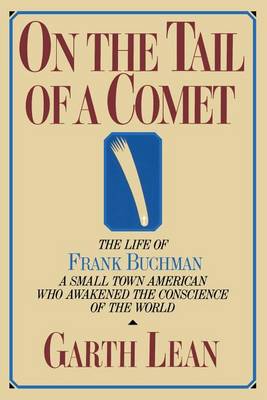 On the Tail of a Comet

The Life of Frank Buchman

Description - On the Tail of a Comet by Garth Lean

This definitive biography of Frank Buchman starts with a small-town American who set out "to remake the world" and in the attempt affected the moral and spiritual condition of thousands of people at every level of society throughout the world. From the rise of black nationalist independence movements in Africa to the civil rights hotbed in the U.S., in the lives of great leaders such as Mahatma Gandhi, Konrad Adenauer, and Harry Truman -- Buchman's remarkable influence kept turning up. Buchman was called "a man of genius" and an "apostle to the twentieth century" by Henry van Dusen in the "Atlantic Monthly." He was founder of the Oxford Group and Moral Re-Armament, and the man whose ideas provided the impetus behind many change-oriented initiatives such as Alcoholics Anonymous. Buchman's biographer, Garth Lean, was a British journalist and prolific author. He held a masters degree in jurisprudence from Oxford University, and was a lifelong student of history. Among his books is "God's Politician," a biographical study of William Wilberforce.

Buy On the Tail of a Comet by Garth Lean from Australia's Online Independent Bookstore, Boomerang Books.

Book Reviews - On the Tail of a Comet by Garth Lean

» Have you read this book? We'd like to know what you think about it - write a review about On the Tail of a Comet book by Garth Lean and you'll earn 50c in Boomerang Bucks loyalty dollars (you must be a Boomerang Books Account Holder - it's free to sign up and there are great benefits!)


A Preview for this title is currently not available.
More Books By Garth Lean
View All