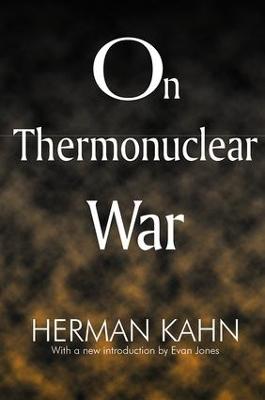 On Thermonuclear War was controversial when originally published and remains so today. It is iconoclastic, crosses disciplinary boundaries, and finally it is calm and compellingly reasonable. The book was widely read on both sides of the Iron Curtain and the result was serious revision in both Western and Soviet strategy and doctrine. As a result, both sides were better able to avoid disaster during the Cold War.

The strategic concepts still apply: defense, local animosities, and the usual balance-of-power issues are still very much with us. Kahn's stated purpose in writing this book was simply: "avoiding disaster and buying time, without specifying the use of this time." By the late 1950s, with both sides H-bomb-armed, reason and time were in short supply.

Kahn, a military analyst at Rand since 1948, understood that a defense based only on thermonuclear arnaments was inconceivable, morally questionable, and not credible.The book was the first to make sense of nuclear weapons. Originally created from a series of lectures, it provides insight into how policymakers consider such issues. One may agree with Kahn or disagree with him on specific issues, but he clearly defined the terrain of the argument. He also looks at other weapons of mass destruction such as biological and chemical, and the history of their use.

The Cold War is over, but the nuclear genie is out of the bottle, and the lessons and principles developed in On Thermonuclear War apply as much to today's China, Russia, Iran, and North Korea as they did to the Soviets.

Other Editions - On Thermonuclear War by Herman Kahn » Have you read this book? We'd like to know what you think about it - write a review about On Thermonuclear War book by Herman Kahn and you'll earn 50c in Boomerang Bucks loyalty dollars (you must be a Boomerang Books Account Holder - it's free to sign up and there are great benefits!)

Herman Kahn (1922-1983) was a renowned political scientist, economist, historian geo-strategist, and considered by many to be the founder of futurology as serious field of study. Associated for many years with the RAND Corporation, he was the founding director of the first independent "think tank," the Hudson Institute. Among his many books are Thinking About the Unthinkable, On Escalation, The Year 2000, The Next 200 Years, The Coming Boom, and The Resourceful Earth. Evan Jones is Herman Kahn's nephew. He is an historical analyst and game designer specializing in strategic simulations. He worked at the Hudson Institute in the mid-70s, primarily doing research used in The Next 200 Years.

A Preview for this title is currently not available.
More Books By Herman Kahn
View All