Twenty Lessons from the Twentieth Century

Description - On Tyranny by Timothy Snyder

A controversial, timely intervention in world affairs from one of the most acclaimed historians of the twentieth century

'A sort of survival book, a sort of symptom-diagnosis manual in terms of losing your democracy and what tyranny and authoritarianism look like up close' Rachel Maddow

'These 128 pages are a brief primer in every important thing we might have learned from the history of the last century, and all that we appear to have forgotten' Observer

History does not repeat, but it does instruct.

In the twentieth century, European democracies collapsed into fascism, Nazism and communism. These were movements in which a leader or a party claimed to give voice to the people, promised to protect them from global existential threats, and rejected reason in favour of myth. European history shows us that societies can break, democracies can fall, ethics can collapse, and ordinary people can find themselves in unimaginable circumstances.

History can familiarise, and it can warn. Today, we are no wiser than the Europeans who saw democracy yield to totalitarianism in the twentieth century. But when the political order seems imperilled, our advantage is that we can learn from their experience to resist the advance of tyranny.

Now is a good time to do so.

Other Editions - On Tyranny by Timothy Snyder 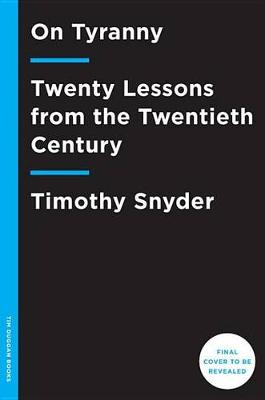 » Have you read this book? We'd like to know what you think about it - write a review about On Tyranny book by Timothy Snyder and you'll earn 50c in Boomerang Bucks loyalty dollars (you must be a Boomerang Books Account Holder - it's free to sign up and there are great benefits!)

'When Timothy Snyder's book Bloodlands- Europe Between Hitler and Stalin was published in 2010, it quickly established its author as one of the leading historians of his generation, a scholar who combined formidable linguistic skills - he reads or speaks 11 languages - with an elegant literary style, white-hot moral passion and a willingness to start arguments about some of the most fraught questions of the recent past.' New York Times Timothy Snyder is Levin Professor of History at Yale University, and has written and edited a number of critically acclaimed and prize-winning books about twentieth-century European history- Bloodlands won the Hannah Arendt Prize, the Leipzig Book Prize for European Understanding, the Ralph Waldo Emerson Award in the Humanities and the literature award of the American Academy of Arts and Letters. Black Earth was longlisted for the Samuel Johnson Prize. Snyder is a frequent contributor to the New York Review of Books and the Times Literary Supplement. He is a member of the Committee on Conscience of the United States Holocaust Memorial Museum, a permanent fellow of the Institute for Human Sciences, and sits on the advisory council of the Yivo Institute for Jewish Research.

A Preview for this title is currently not available.
More Books By Timothy Snyder
View All