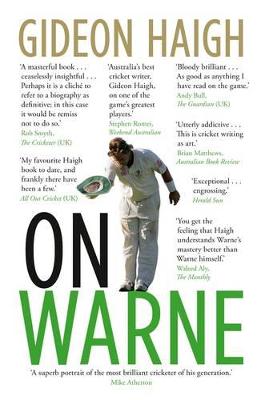 Description - On Warne by Gideon Haigh

Now that the cricketer who dominated airwaves and headlines for twenty years has turned full-time celebrity, his sporting conquests and controversies are receding into the past. But what was it like to watch Warne at his long peak, the man of a thousand international wickets, the incarnation of Australian audacity and cheek? Gideon Haigh lived and loved the Warne era, when the impossible was everyday, and the sensational every other day. In On Warne, he relives the highs, the lows, the fun and the follies. Drawing on interviews conducted with Warne over the course of a decade, and two decades of watching him play, Haigh assesses this greatest of sportsmen as cricketer, character, comrade, newsmaker and national figure - a natural in an increasingly regimented time, a simplifier in a growingly complicated world. The result is a whole new way of looking at Warne, at sport, and at Australia. Winner- 2013 Jack Pollard Literary Award (Australian Cricket Society), & the 2013 UK Cricket Society and MCC Book of the Year 'The Bradman of cricket writing spins us a yarn with deftness, skill and intrigue.' Sunday Telegraph (UK) 'Brilliantly incisive but also affectionate . . . Packed with insight and interpretation.' Peter Pierce, Weekend Australian 'Gideon Haigh's slim, elegant book On Warne has its own kind of confidence . . . Haigh is an excellent essayist.' Ed Smith New Statesman 'Haigh writes as poetically as Warne bowled . . . simply irresistible. A fabulous read.' Ken Piesse, Universal's Summer Cricket Tour Guide 2012-13

Other Editions - On Warne by Gideon Haigh 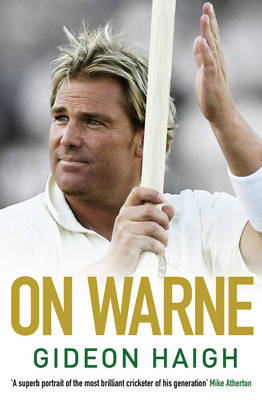 » Have you read this book? We'd like to know what you think about it - write a review about On Warne book by Gideon Haigh and you'll earn 50c in Boomerang Bucks loyalty dollars (you must be a Boomerang Books Account Holder - it's free to sign up and there are great benefits!)

Gideon Haigh has been a journalist for more than thirty years, contributed to more than a hundred newspapers and magazines, written thirty books and edited seven others. His book On Warne won the British Sports Book Awards Best Cricket Book of the Year Award, the Cricket Society and MCC Book of the Year Award, the Jack Pollard Trophy, and the Waverley Library Nib Award; it was also shortlisted for the Australian Book Industry Awards Biography of the Year, the Victorian Premier's Literary Awards, and the Adelaide Festival Awards for Literature. The Office won the NSW Premier's Literary Awards Douglas Stewart Prize for Non-fiction. Other recent titles include Uncertain Corridors- Writings on Modern Cricket, End of the Road? on Australia's automotive industry, and The Deserted Newsroom, about media in a digital age.