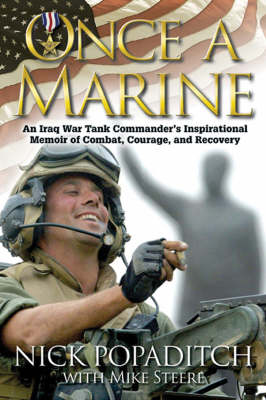 Description - Once a Marine by Nick Popaditch

May 6, 1986: Nick Popaditch arrives at the Receiving Barracks, Marine Corps Recruit Depot, San Diego, California. April 9, 2003: An AP photographer captures a striking image seen around the world of the Gunny Sergeant smoking a victory cigar in his tank, the haunting statue of Saddam Hussein hovering in the background. Popaditch is immortalized forever as "The Cigar Marine." April 6, 2004: The tanker fights heroically in the battle for Fallujah and suffers grievous head wounds that leave him legally blind and partially deaf. The USMC awards him with a Silver Star for his valor and combat innovation. April 18, 2004: "Gunny Pop" comes home to face the toughest fight of his life-a battle to remain the man and Marine he was. Readers in and out of the military will stand up and cheer for this valiant Marine's Marine, a man who embodies everything noble and proud in the Corps' long tradition. Never has modern mechanized combat seemed so immediate and real, or the fight in Iraq seemed so human and worth believing in. At first, Nick fights to get back to where he was in Iraq-in the cupola of an M1A1 main battle tank, leading Marines in combat at the point of the spear. As the seriousness and permanence of his disabilities become more evident, Nick fights to remain in the Corps in any capacity, to help the brothers in arms he so aches to rejoin. Facing the inevitable following a medical retirement, he battles for rightful recognition and compensation for his permanent disabilities. Throughout his harrowing ordeal, Nick fights to maintain his honor and loyalty, waging all these battles the same way-the Marine way-because anything less would be a betrayal of all he holds dear. The real triumph in Once a Marine is its previously untold, behind-the-scenes tale of the day-to-day life of a career Marine non-commissioned staff officer. In most books and movies, a "Gunny" is little more than a cardboard character. Nick's portrayal is a man complete: a husband and father, as well as a warrior and a molder of young warriors. He reveals himself completely, something no memoirist in his position has ever done before. This includes our very personal introduction to his wife April, whose heroics in the story equal Nick's, together with dozens of others who, as Sgt. Popaditch writes, gave so much, so selflessly and freely, to him. Like the man himself, Once a Marine is full of gratitude and refreshingly free of false bravado and braggadocio. All Americans, of all political persuasions, have a duty to meet this courageous and admirable fighting man, an exemplar of all our military men and women who give so much out of love for their nation. Meeting Gunny Sergeant Popaditch through the pages of his inspirational memoir offers up new reasons to be proud and shoulder our own responsibilities as Americans. Once a Marine will instantly take its place among outstanding combat classics. 20 b/w photo insert

Other Editions - Once a Marine by Nick Popaditch 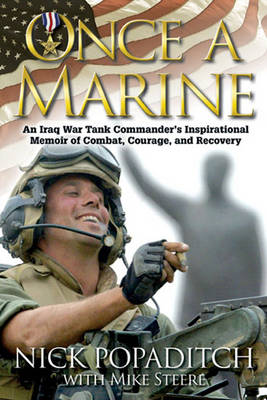 Book Reviews - Once a Marine by Nick Popaditch

» Have you read this book? We'd like to know what you think about it - write a review about Once a Marine book by Nick Popaditch and you'll earn 50c in Boomerang Bucks loyalty dollars (you must be a Boomerang Books Account Holder - it's free to sign up and there are great benefits!)

Mike Steere is an author and freelance journalist based in Los Angeles. His most recent book-length collaboration is Brothers of Iron (Sports Publishing LLC) and he has written for Outside, The New York Times, Mens Journal, Wired, and many national publications. He also writes for television.

A Preview for this title is currently not available.
More Books By Nick Popaditch
View All