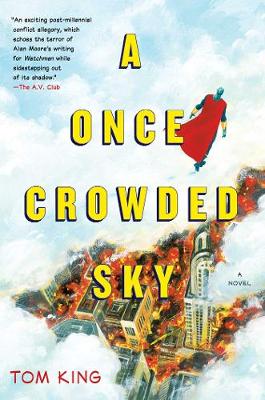 A Once Crowded Sky

Description - A Once Crowded Sky by Tom King

The super men of Arcadia City fight daily to destroy the earth's villains-until they are forced to sacrifice their unique powers along with Ultimate, the greatest hero of them all, to save the world. Suddenly these comic book characters are transformed from the marvelous into the mundane, forced to cope with life as ordinary human beings.

One superhero, The Soldier of Freedom, had no problem letting go of the glory. But when a new threat blasts through Arcadia, he accepts his duty and reenlists in the next great war without his amazing abilities. He's forced to seek the help of the sole hero who refused to make the sacrifice-PenUltimate, the sidekick of Ultimate, who through his own rejection of the game has become the most powerful man in the world, and the only one who can rescue humanity from destruction.

After working as a CIA counterterrorism agent behind enemy lines in war zones across the world, novelist Tom King was inspired to use the comic book genre to comment on a society too eager to group the world into villains and heroes. The result is this tour de force debut, combining bombastic, comic-book-style storytelling with modern literary fiction.

Incredibly original and brilliantly imaginative, A Once Crowded Sky will captivate avid comic book fans and literary fiction readers with its ingenious spin on the world of villains and superheroes...where nothing is truly black or white.


Book Reviews - A Once Crowded Sky by Tom King

» Have you read this book? We'd like to know what you think about it - write a review about Once Crowded Sky book by Tom King and you'll earn 50c in Boomerang Bucks loyalty dollars (you must be a Boomerang Books Account Holder - it's free to sign up and there are great benefits!)