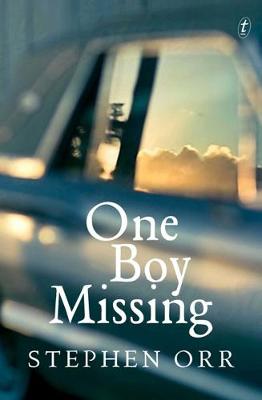 It was a butcher on smoko who reported the man stashing the kid in the car boot. He didn't really know whether he'd seen anything at all, though. Maybe an abduction? Maybe just a stressed-out father. Detective Bart Moy, newly returned to the country town where his ailing, cantankerous father still lives, finds nothing. As far as he can tell no one in Guilderton is missing a small boy. Still, he looks deeper into the butcher's story - after all, he had a son of his own once. But when the boy does turn up, silent, apparently traumatised, things are no clearer. Who is he? Where did he come from and what happened to him? For Moy, gaining the boy's trust becomes central not just to the case but to rebuilding his own life. From the wreckage of his grief, his dead marriage and his fractured relationship with his father may yet come a chance for something new. A mystery, a meditation on fatherhood, a harrowing examination of love and loss- a new departure in literary crime from Stephen Orr.

» Have you read this book? We'd like to know what you think about it - write a review about One Boy Missing book by Stephen Orr and you'll earn 50c in Boomerang Bucks loyalty dollars (you must be a Boomerang Books Account Holder - it's free to sign up and there are great benefits!)

One Boy Missing is the fifth novel by Australian author, Stephen Orr. Unable to put behind him the accidental death of his son, Charlie, and his subsequent divorce, Detective Sergeant Bart Moy returns to his rather dreary home town of Guilderton in outback New South Wales. His father, George is ageing and being there to help out is as good an excuse as any to escape the city. When the local butcher sees a young boy being roughly shoved into a car boot, the police are puzzled as no-one in town claims to be missing a child. While apparently only going through the motions with his duties much of the time, this case strikes a chord with Moy and he is determined to get to the bottom of the abduction. Interspersed into Moy’s narration of present-day occurrences are the flash-backs to the events surrounding Charlie’s death that constantly haunt him. The characters with whom Orr populates his novel will be familiar to many readers: the cranky old bloke (who is especially well-drawn); the nosy neighbour with the casserole offering; the laconic desk sergeant; the belligerent old hermit; the contemptuous young shop assistant; the apathetic cop. The dialogue is completely natural and the interactions between Bart, George and the boy are often funny and sometimes quite poignant. The feel of the country town and its inhabitants is expertly rendered. As well as exploring the father/son relationship, Orr touches on the destruction of reputation, the loss of a loved one, the sense of community. This literary crime novel tootles along at country town pace then rushes headlong into a gripping climax. Fans of Orr’s novels will not be disappointed with this one; newcomers to his work will no doubt seek out more of it.

Stephen Orr is the author of several published works of fiction and non-fiction. His novel Time's Long Ruin was shortlisted for the Commonwealth Writers' Prize and longlisted for the Miles Franklin Award in 2011. He lives in Adelaide.

A Preview for this title is currently not available.
More Books By Stephen Orr
View All