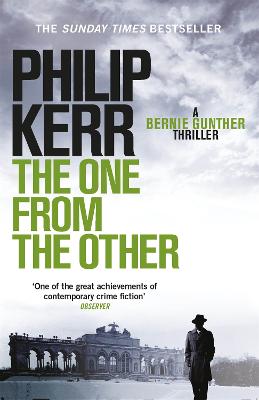 The One From The Other

Description - The One From The Other by Philip Kerr

'One of the greatest anti-heroes ever written' LEE CHILDBernie Gunther has learned the hard way that there's no way to distinguish 'the one from the other'. The cynical P.I. has the moral clarity to see through the deceit and hypocrisy of both friend and foe - a lifesaving skill in the dangerous years of postwar Germany.Munich, 1949: Amid the chaos of defeat, it's home to all the backstabbing intrigue that prospers in the aftermath of war. A place where a private eye can find a lot of not-quite-reputable work: cleaning up the Nazi past of well-to-do locals, abetting fugitives in the flight abroad, sorting out rival claims to stolen goods. It's work that fills Bernie with disgust - but it also fills his sorely depleted wallet. Then a woman seeks him out. Her husband has disappeared. She's not looking to get him back - he's a wanted man who ran one of the most vicious concentration camps in Poland. She just wants confirmation that he's dead. It's a simple enough job. But in post-war Germany, nothing is simple...

Buy The One From The Other by Philip Kerr from Australia's Online Independent Bookstore, Boomerang Books.

Other Editions - The One From The Other by Philip Kerr 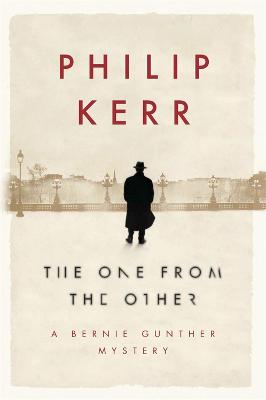 Book Reviews - The One From The Other by Philip Kerr

» Have you read this book? We'd like to know what you think about it - write a review about One From The Other book by Philip Kerr and you'll earn 50c in Boomerang Bucks loyalty dollars (you must be a Boomerang Books Account Holder - it's free to sign up and there are great benefits!)

Philip Kerr was born in Edinburgh and went on to study at the University of Birmingham. He has written three other Bernie Gunther books and a book for children, entitled Children of the Lamp. He lives in London and Cornwall. He is currently working on a new Bernie Gunther novel.