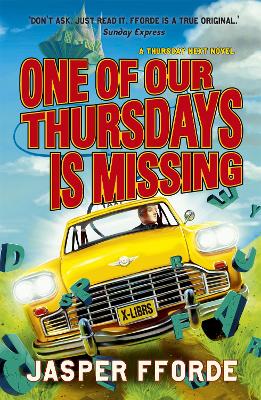 One of our Thursdays is Missing

Description - One of our Thursdays is Missing by Jasper Fforde

It is a time of unrest in the BookWorld. Only the diplomatic skills of ace literary detective Thursday Next can avert a devastating genre war. But a week before the peace talks, Thursday vanishes. Has she simply returned home to the RealWorld or is this something more sinister?All is not yet lost. Living at the quiet end of speculative fiction is the written Thursday Next, eager to prove herself worthy of her illustrious namesake.The fictional Thursday is soon hot on the trail of her factual alter-ego, and quickly stumbles upon a plot so fiendish that it threatens the very BookWorld itself.

Buy One of our Thursdays is Missing by Jasper Fforde from Australia's Online Independent Bookstore, Boomerang Books.

Other Editions - One of our Thursdays is Missing by Jasper Fforde 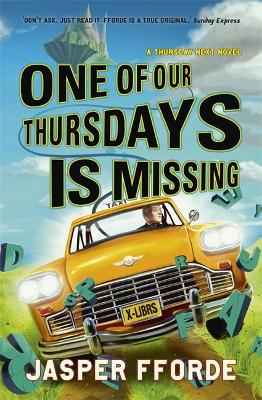 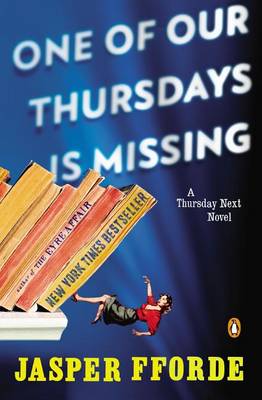 Book Reviews - One of our Thursdays is Missing by Jasper Fforde

» Have you read this book? We'd like to know what you think about it - write a review about One of our Thursdays is Missing book by Jasper Fforde and you'll earn 50c in Boomerang Bucks loyalty dollars (you must be a Boomerang Books Account Holder - it's free to sign up and there are great benefits!)

Book Review: One of our Thursdays is Missing by Jasper Fforde - Reviewed by CloggieA (30 Jun 2013)

One Of Our Thursdays Is Missing is the sixth novel in the popular Thursday Next series by Welsh author, Jasper Fforde. Not long after the Remake of BookWorld, it seems that Real World Thursday Next is missing. Written Thursday (Thursday 1-4 from First Among Sequels, the huggy one) has been trying to play Thursday with dignity, but the series is virtually unread, so the presence of an understudy allows her to investigate with the help of Sprocket, a clockwork butler she has acquired (everyone needs a butler). This instalment features Men in Plaid as enforcers, a Triumph Bonneville, inter-genre cabs, a book sabotaged by rhetorical worms, a geologist thrown from a window, and a car chase. Written Thursday travels to the Real World, meets the real Landen, is kidnapped by a Wiltshire Stiltonista, tries to interpret obscure clues to Thursday’s whereabouts, travels up the Metaphoric River, meets some Loser Literary Siblings (The Mediocre Gatsby, Brian Heep, Tracy Capulet, Sharon Eyre etc) and is finally offered a job with Jurisfiction. Concepts like character assassins, a mime field, the Large Metaphor Collider and the intricacies of a character’s backstory are also a source of entertainment. Fforde still delights with some absurd names like Keitel Black, Red Herring and D.J. Growling, and each chapter is prefaced by a pertinent passage from Bradshaw’s BookWord Companion, which, we note, runs to at least fifteen editions, confirming that Colonel Bradshaw’s eventual retirement must have been profitable. As always, Fforde is incredibly clever: this is a brilliant read.

Jasper Fforde traded a varied career in the film industry for staring out of the window and chewing the end of a pencil. He lives and works in Wales and has a passion for aviation.

Early Riser: The standalone novel from the Number One bestselling author
$16.79 $19.99