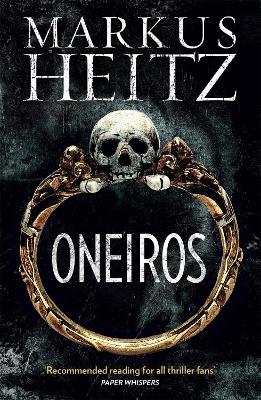 In Leipzig an undertaker named Konstantin Korff harbours a cruel secret.In Minsk an unscrupulous scientist performs questionable experiments.And in Paris a plane that is about to take off crashes into an airport terminal with deadly consequences for its passengers.An investigation into the accident begins immediately, but the results are puzzling: all occupants were dead before the plane hit the building. What the police do not know is that there was one survivor. But even as they blunder into the investigation, Konstantin Korff and the mysterious scientist are already on his trail, all three bound together by the same curse. A curse that makes them a danger to everyone around them.

» Have you read this book? We'd like to know what you think about it - write a review about Oneiros book by Markus Heitz and you'll earn 50c in Boomerang Bucks loyalty dollars (you must be a Boomerang Books Account Holder - it's free to sign up and there are great benefits!)

Markus Heitz studied history and German language and literature at university before turning to writing. His debut novel Schatten uber Ulldart (the first in a series of epic fantasy novels) won the Deutscher Phantastik Preis (German Fantasy Award) in 2003, and was followed by his bestselling Dwarves and the tie-in Aelfar series, which have made him one of Germany's - and Europe's - most successful fantasy authors. He currently lives in Zweibrucken, Germany.

A Preview for this title is currently not available.
More Books By Markus Heitz
View All