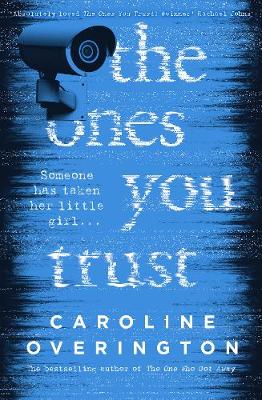 The Ones You Trust

Description - The Ones You Trust by Caroline Overington

that will have you thinking twice about who in your life you can really trust ...

'The Ones You Trust is a CRACKER! ... could not put it down.' MIA FREEDMAN

'I devoured this ... Overington skewers commercial television culture beautifully and had me guessing until the very last page' TRACEY SPICER

'Absolutely loved The Ones You Trust! #winner' RACHAEL JOHNS

Emma Cardwell, celebrity mum and host of top-rating morning TV show Cuppa, seems to have it all: fame, money and a gorgeous family. But when her little girl disappears from day-care - captured on CCTV footage at a nearby shopping centre leaving with someone Emma has never seen before - her world is turned upside down.

As the minutes tick by, and pressure mounts, every part of Emma's life comes under examination. Is this a kidnapping, the work of a crazed stalker, or an obsessed fan? Is somebody out for revenge or is this something closer to home?

And there is the aching question: how much do we really know about those who care for our children . . . and about the people we love?

'WARNING: Do not buy if you work in morning TV. Everyone else will love it ... Great read on a rainy weekend.' Edwina Bartholomew, Sunrise presenter

'Overington keeps you guessing until the last' Daily Telegraph

'Caroline Overington has an ability to home in on the darker, unsettling sides of life, seizing upon topics you might see headlining the news and spinning them into gripping page-turners' Australian Women's Weekly

Buy The Ones You Trust by Caroline Overington from Australia's Online Independent Bookstore, Boomerang Books.

Other Editions - The Ones You Trust by Caroline Overington 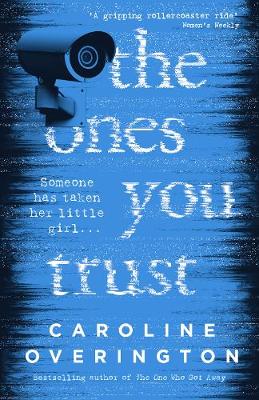 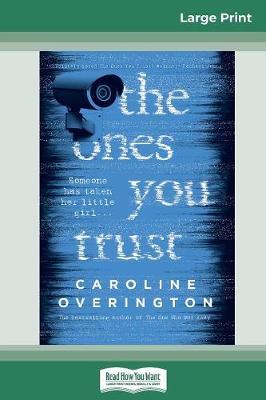 Book Reviews - The Ones You Trust by Caroline Overington

» Have you read this book? We'd like to know what you think about it - write a review about Ones You Trust book by Caroline Overington and you'll earn 50c in Boomerang Bucks loyalty dollars (you must be a Boomerang Books Account Holder - it's free to sign up and there are great benefits!)

Book Review: Ones You Trust by Caroline Overington - Reviewed by CloggieA (28 Nov 2018)

The Ones You Trust is the twelfth novel by award-winning Australian journalist, editor and author Caroline Overington. Little Fox-Piper Cardwell-Cole has been collected from Crayon and Clay daycare, located in the Gallery Main Street mall, by an unknown woman. She's just seventeen months old and her parents are frantic. Her mother, Emma Cardwell is the Stellar Network’s morning TV co-host on Cuppa, and a mix-up means that Fox has been missing for seven hours before it is discovered.

Detective Paul Franklin and his team are very quickly on the scene, checking the location, interviewing daycare staff, reviewing CCTV footage, coordinating with the media. Soon, an Amber Alert is declared, and the state is eagerly watching for developments. Franklin tries to cover all the possibilities, initially giving no one the benefit of the doubt. With good reason: he can tell that no one he interviews is being completely candid, but is whatever they are editing out relevant to the events now taking place?

A ransom demand is a long time coming and the family spends an agonising night wondering about the fate of their sweet little daughter and sister. The saturation publicity brings a few weirdos out of the woodwork, serving to distract from the search for Fox. Meanwhile, Stellar’s publicity and crisis management Maven seems determined to cash in on the situation for the publicity value. The paparazzi are relentless and the rival network engages in shameless one-up-man-ship.

Overington splits the story into three parts, with the bulk covering the hours before and during the kidnap, with the latter part of the story devoted to the aftermath in the ensuing weeks. Readers may, understandably, fix on a certain character as the guilty party, but it seems no one is altogether innocent. Overington gives the reader a number of red herrings to keep them guessing, while taking the plot to its jaw-dropping climax through so many turns there may be an increased uptake in chiropractic appointments.

Each chapter is prefaced by a quote from social or conventional media about the ongoing drama. There’s plenty of guilt and blame going on, and Overington touches on several topical issues: the career vs stay-at-home mother, the reversal of traditional parenting roles, the double standard that exists with regards the appearance and behaviour for female and male celebrities. Should we be surprised at how cold, calculating and utterly self-serving many of the people in show business can be, and how quickly the media mobilises to exploit the situation? Probably not. A brilliant page-turner!

Boys Will be Boys: Power, Patriarchy and the Toxic Bonds of Mateship
Clementine Ford
$28.04 $32.99

The Football Solution: How Richmond's premiership can save Australia
George Megalogenis
$28.04 $32.99
More Books By Caroline Overington
View All