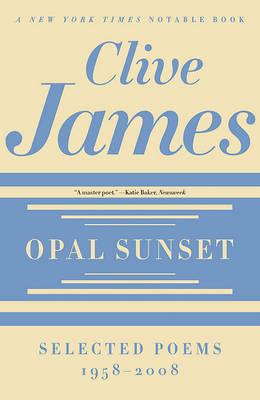 Opal Sunset marks the exuberant introduction of Clive James's poetry to an American audience. Praised after the publication of Cultural Amnesia as one of the finest prose stylists of his generation, Clive James is now, with the publication of this collection, being granted recognition as the poet he has always been. For much of his long career it was hard to realize that James's gift for poetry underlay his achievements in other fields. First as a television critic on Fleet Street, and later as a television personality in his own right, he achieved such fame for writing the way he spoke that his poetry was regarded as an idiosyncratic sideline, as if no celebrity could write worthy verse. A conundrum presented itself: how could a serious poet also be a television star? But for James, a duty to the discipline of verse was always fundamental, and his accumulated poetic output became impossible to ignore. As early as the 1970s, James's long, mock epic "Peregrine Prykke's Pilgrimage through the London Literary World" received almost unprecedented attention in his adopted England, while later, his satirical short poem "The Book of My Enemy Has Been Remaindered" became not only a standard verse quoted at fancy dinner parties but entered the culture as lines to be memorized by unpublished writers everywhere. James was suddenly in the odd position of having written famous poems well before he became a famous poet. Finally, the publication of a volume of his collected verse, The Book of My Enemy, earned him in 2003 the reputation as a serious poet that he has long deserved. Less inhibited by fixed categories, a new generation of critics has confirmed what James's public has instinctively known, that he brings his poems to life with all the resources to be found in his prose: wit, imagination, social observation, and a dazzling play of language. In addition, his poems have an unmistakably characteristic rhythm that makes it compulsory to read them aloud. Switching between strict stanzas and free forms as the occasion suits, James brings a compulsively readable coherence to either mode; and always, over and above the binding force of his metrical assurance, there is a lyricism that brings even the plainest statement to extra life, and which often enters deeply into realms of human emotion. His later poems about the tragedy that struck his mother and father, for example, show an intensity of regret that mark his maturity as a poet and bring out his unashamed nostalgia for his homeland, Australia. Opal Sunset is a treasure chamber of epigrammatic jewels to which the reader will return again and again. 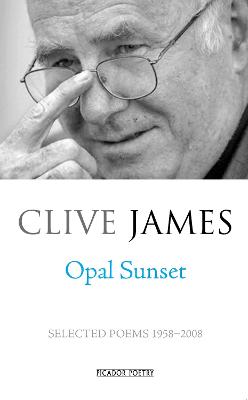 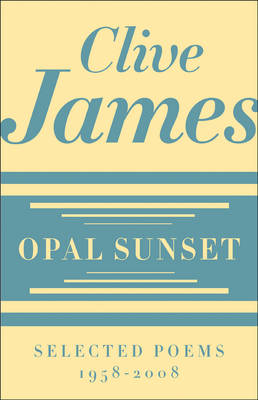 » Have you read this book? We'd like to know what you think about it - write a review about Opal Sunset book by Clive James and you'll earn 50c in Boomerang Bucks loyalty dollars (you must be a Boomerang Books Account Holder - it's free to sign up and there are great benefits!)

Born in Australia, Clive James lives in Cambridge, England. He is the author of Unreliable Memoirs; a volume of selected poems, Opal Sunset; the best-selling Cultural Amnesia; and the translator of The Divine Comedy by Dante. He has written for the New York Times Book Review, The New Yorker, and The Atlantic. He is an Officer of the Order of Australia and a Commander of the Order of the British Empire.