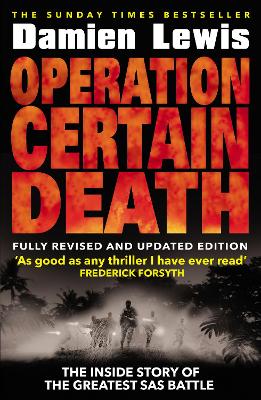 This book chronicles the story of the single most daring Special Forces operation since World War Two - Operation Barras; the attempted rescue by the SAS of the British Forces who were being held captive by guerrilla gang the West Side Boys in the Sierra Leone jungle. The West Side Boys were a strange-looking bunch, wearing pink shades, shower caps, fluorescent wigs and voodoo charms they believed made them invulnerable to bullets - an impression re-enforced by ganja, heroine, crack cocaine and gallons of sweet palm wine. In 1999 a twelve man patrol of Royal Irish Rangers, who were training government troops in Sierra Leone, were captured and held hostage by the West Side Boys. They were held prisoner in a fortified jungle hideaway, with severed heads decorating the palisades, defended by some 400 heavily armed soldiers. Operation Barras, the rescue mission, was a combined force of 100 Paras, twelve members of the Special Boat Squadron, helicopters from the Navy and RAF and, spearheading the operation, 40-strong D squadron of the SAS. Against amazing odds the hostages were rescued - over 150 of the enemy were killed. Operation Certain Death is a thrilling true story of all out war. No hostages taken. Blood-letting on a vast scale inflicted on a very blood-thirsty enemy. A gripping piece of true military history, perfect for fans of action adventure stories and anyone interested in the top secret division of the British Army. » Have you read this book? We'd like to know what you think about it - write a review about Operation Certain Death book by Damien Lewis and you'll earn 50c in Boomerang Bucks loyalty dollars (you must be a Boomerang Books Account Holder - it's free to sign up and there are great benefits!)

Damien Lewis is a journalist and documentary film maker and has spent twenty years reporting from conflict zones. He has worked for the Telegraph, the Guardian and the BBC. Slave and Operation Certain Death have both been Sunday Times bestsellers. He lives in London.