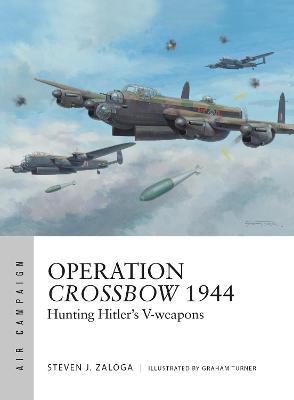 In mid-1943, Allied intelligence began to pick up the signs of unusual German construction in remote locations near the Channel Coast. Several massive fortifications were beginning to take shape, and they appeared to be oriented towards London. Allied intelligence codenamed these sites as "Crossbow" and began plans to attack them before they could bombard Britain's capital city. These "Heavy Crossbow" sites for the V-1 and V-2 missiles were supposed to be bomb-proof, but they soon attracted the attention of RAF heavy bombers with the new Tallboy concrete-penetrating bombs.

» Have you read this book? We'd like to know what you think about it - write a review about Operation Crossbow 1944 book by Steven J. Zaloga and you'll earn 50c in Boomerang Bucks loyalty dollars (you must be a Boomerang Books Account Holder - it's free to sign up and there are great benefits!)

Steven J. Zaloga received his BA in History from Union College and his MA from Columbia University. He has worked as an analyst in the aerospace industry for over two decades, covering missile systems and the international arms trade, and has served with the Institute for Defense Analyses, a federal think tank. He is the author of numerous books on military technology and military history, with an accent on the US Army in World War II as well as Russia and the former Soviet Union. He lives in Maryland, USA.