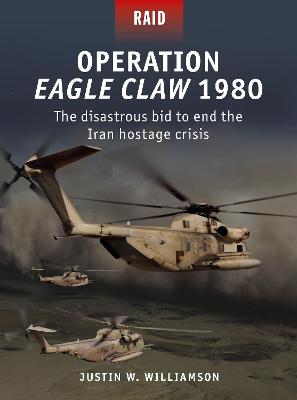 Following months of negotiations after the seizure of the US Embassy in Tehran on 4 November 1979, President Jimmy Carter ordered the newly formed Delta Force to conduct a raid into Iran to free the hostages. The raid, Operation Eagle Claw, was risky to say the least. US forces would have to fly into the deserts of Iran on C-130s; marry up with carrier-based RH-53D helicopters; fly to hide sites near Tehran; approach the Embassy via trucks; seize the Embassy and rescue the hostages; board the helicopters descending on Tehran; fly to an airbase captured by more US forces; and then fly out on C-141s and to freedom. Unfortunately, and unsurprisingly given the complexity of the mission, things went wrong from the start and when the mission was called off at the refueling site at Desert One, the resulting collision between aircraft killed eight US personnel.

This title tells the full story of this tragic operation, supported by maps, photographs, and specially-commissioned bird's-eye-views and battlescenes which reveal the complexity and scale of the proposed rescue and the disaster which followed.

» Have you read this book? We'd like to know what you think about it - write a review about Operation Eagle Claw 1980: The disastrous bid to end the Iran hostage crisis book by Justin Williamson and you'll earn 50c in Boomerang Bucks loyalty dollars (you must be a Boomerang Books Account Holder - it's free to sign up and there are great benefits!)


A Preview for this title is currently not available.
More Books By Justin Williamson
View All