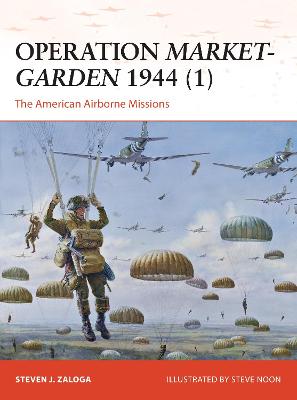 In the summer of 1944, plans began for a complex operation to seize a Rhine river bridge at Arnhem in the Netherlands. The American portion of the airborne mission was to employ two divisions of the US XVIII Airborne Corps to seize key terrain features that otherwise might delay the advance of British tanks towards the bridge. The 82nd and 101st Airborne Divisions succeeded in their tasks of capturing the vital bridges at Eindhoven at Nijmegen in the face of fierce German resistance. However, the delays caused to the British armored advance, combined with stronger than expected fighting at Arnhem led to the withdrawal of the remnants of the British 1st Airborne Division in one of the Western Allies' most costly defeats of World War II. Contemporary photographs, maps and detailed color artwork complement extensive archival research that reveals the successes of those American airborne missions, largely overshadowed by the failure of the operation as a whole.

» Have you read this book? We'd like to know what you think about it - write a review about Operation Market-Garden 1944 1 book by Steven J. Zaloga and you'll earn 50c in Boomerang Bucks loyalty dollars (you must be a Boomerang Books Account Holder - it's free to sign up and there are great benefits!)

Steven J. Zaloga received his BA in History from Union College and his MA from Columbia University. He has worked as an analyst in the aerospace industry for over two decades, covering missile systems and the international arms trade, and has served with the Institute for Defense Analyses, a federal think tank. He is the author of numerous books on military technology and military history, with an accent on the US Army in World War II as well as Russia and the former Soviet Union. Steve Noon was born in Kent, UK, and attended art college in Cornwall. He's had a life-long passion for illustration, and since 1985 has worked as a professional artist. He has provided award-winning illustrations for the publishers Dorling Kindersley, where his interest in historical illustration began. Steve has illustrated over 30 books for Osprey.