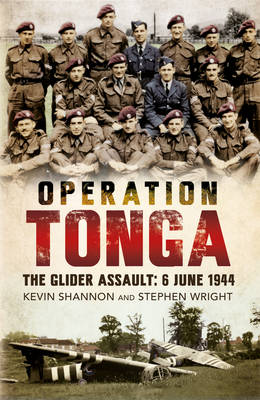 Operation Tonga - The Glider Assault: 6 June 1944 is an account of the Glider Pilot Regiments role in Operation Tonga, the first stage of the airborne assault in the Normandy landings in June 1944. The story is told through the eyes of those who were there - glider pilots, paratroopers, pathfinders, tug crews and passengers - and covers the operation from training through to evacuations after D-Day.

» Have you read this book? We'd like to know what you think about it - write a review about Operation Tonga book by Kevin Shannon and you'll earn 50c in Boomerang Bucks loyalty dollars (you must be a Boomerang Books Account Holder - it's free to sign up and there are great benefits!)

Kevin Shannon's father, Bill, took part in Operation Tonga. Shannon spent ten years in the British Army, serving in a number of regiments. After many years of teaching history in a secondary school, he now works with young people with behavioural problems. Stephen Wright is the nephew of Billy Marfleet who was killed on Operation Tonga. He is a former teacher and currently works as a youth officer in the fire and rescue service. It was through their mutual interest in the operation that the two spent three years gathering stories from survivors and reading official accounts.

A Preview for this title is currently not available.
More Books By Kevin Shannon
View All

The Liverpool Rifles: A Biography of the 1/6th Battalion King's Liverpool Regiment in the First World War
Available, ships in 7-10 business days
$71.99 $79.99