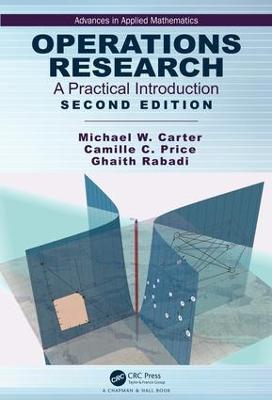 Operations Research: A Practical Introduction is just that: a hands-on approach to the field of operations research (OR) and a useful guide for using OR techniques in scientific decision making, design, analysis and management. The text accomplishes two goals. First, it provides readers with an introduction to standard mathematical models and algorithms. Second, it is a thorough examination of practical issues relevant to the development and use of computational methods for problem solving.

Many students of various disciplines such as mathematics, economics, industrial engineering and computer science often take one course in operations research. This book is written to provide a succinct and efficient introduction to the subject for these students, while offering a sound and fundamental preparation for more advanced courses in linear and nonlinear optimization, and many stochastic models and analyses.

It provides relevant analytical tools for this varied audience and will also serve professionals, corporate managers, and technical consultants.

» Have you read this book? We'd like to know what you think about it - write a review about Operations Research book by Michael Carter and you'll earn 50c in Boomerang Bucks loyalty dollars (you must be a Boomerang Books Account Holder - it's free to sign up and there are great benefits!)

Michael Carter is a Professor in the Department of Mechanical and Industrial Engineering at the University of Toronto (since 1981) and Founding Director of the Centre for Healthcare Engineering. His research focus has been in the area of health care resource modeling with a variety of projects in hospitals, home care, rehab, long term care, medical labs and mental health institutions. He has won the Annual Practice Prize from the Canadian Operational Research Society (CORS) four times (1988, 1992, 1996 and 2009). In 2000, he received the CORS Award of Merit for lifetime contributions to Canadian Operational Research. He also received an "Excellence in Teaching" Award from the University of Toronto Student Administrative Council. He is on the Advisory Board for the Regenstreif Centre for Healthcare Engineering at Purdue University, an Adjunct Scientist with the Institute for Clinical Evaluative Sciences in Toronto (www.ices.on.ca) and a member of the Faculty Advisory Council for the UofT Chapter of the Institute for Healthcare Improvement (IHI). He is member of the Professional Engineers of Ontario. In 2012, he was inducted as a Fellow of the Canadian Academy of Engineering and in 2013, he was inducted as a Fellow of INFORMS, the international society for Operations Research and Management Science. Camille Price is Professor Emeritus of Department of Computer Science, Stephen F. Austin State University where she served from 1971-2005. She holds a PhD from Texas A&M University in CS with a minor in OR. Ghaith Rabadi is a faculty member in the Department of Engineering Management & Systems Engineering at Old Dominion University. He received his Ph.D. and M.S. in Industrial Engineering from the University of Central Florida (UCF)in 1999 and 1996 respectively, and his B.S. in Industrial Engineering from the University of Jordan in 1992. He has published numerous journal and conference papers and contributed several book chapters in edited volumes. His research has been funded by NASA, Department of Homeland Security, Virginia Port Authority, Northrop Grumman Shipbuilding, MITRE Corporation, STIHL, CACI, Sentara Hospitals and Qatar National Research Fund of Qatar Foundation. His research and teaching interests include Planning and Scheduling, Operations Research, Simulation Modeling and Analysis, Analytics, and Supply Chain Management and Logistics. He founded the International Journal of Planning and Scheduling in 2010 and has been serving as its Chief Editor since then.

A Preview for this title is currently not available.
More Books By Michael Carter
View All