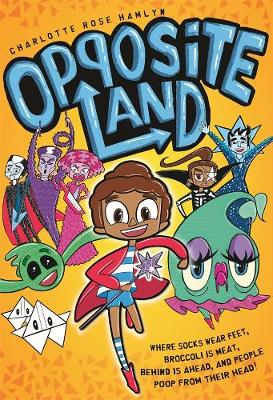 An exciting and unforgettable graphic novel that takes you on a magical adventure to a place where everything is never as it seems . . .

An exciting and unforgettable graphic novel that takes you on a magical adventure to a place where everything is never as it seems . . .

Welcome to Opposite Land - where socks wear feet, broccoli is meat, behind is ahead, and people poop from their head!

After the worst day ever, Steve discovers a strange book written upside down and back to front. That night, when its words become mysteriously clear and Steve begins to read them, she's transported to the topsy-turvy world in the book - Opposite Land. In this extraordinarily peculiar place, roads float in mid-air, people live in giant snail shells and monsters are made of pasta!

But all that will change once Emperor Never gets his way and destroys Opposite Land for good. When a flying cabbage called Sanjiv reveals that Steve is the only one who can defeat the emperor, it's up to Steve to face her fears and save the world.

Can Steve help restore Opposite Land to its former glory and find her way back home?

» Have you read this book? We'd like to know what you think about it - write a review about Opposite Land book by Charlotte Rose Hamlyn and you'll earn 50c in Boomerang Bucks loyalty dollars (you must be a Boomerang Books Account Holder - it's free to sign up and there are great benefits!)

Charlotte Rose Hamlyn is a Sydney-based storyteller and an award-winning screenwriter for cartoons like Beat Bugs, Blinky Bill, Tashi and Guess How Much I Love You?. She's also a television presenter for Channel 7's art and craft show Get Arty, voices cartoon characters, including Marcia the Mouse in Blinky Bill- The Movie, and is a retired professional fairy. Earlier in her career, Charlotte made short films about spiders with human-phobias and worked for Academy Award-winning director George Miller on Happy Feet 2. She grew up in Adelaide, Australia, but now lives in Sydney, where she spends her time writing and drawing in a colourful house full of art, plants and lots of pencils. She likes sequins, and pineapple on pizza.