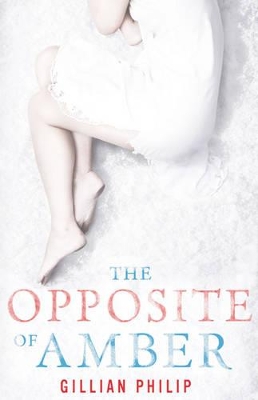 The Opposite of Amber

Description - The Opposite of Amber by Gillian Philip

'They found the fifth girl right after the snow melted . . . the place where he left her was winter water, crazed with ice-feathers and dusted with snow. The traces from her body were gone, the ones that said his name, but she had an extra skin of ice that protected her and she looked perfect, like Snow White.'

Ruby and her older sister, Jinn, are on their own, just about making ends meet. Jinn is beautiful, with glittering blonde hair, and makes it her business to look after Ruby. They are horrified by, but try to ignore, the local newspaper stories of prostitutes who are murdered, their bodies eventually discovered underwater. Then the no-good Nathan Baird turns up on the scene - again - and Jinn starts to change and no longer has time to look after Ruby. And it seems to Ruby that Jinn herself needs looking after. Her beautiful glittering hair starts to lose its shine. And then Jinn disappears.

A deeply moving, chilling, and incredibly powerful thriller that celebrates the love two sisters have for each other and mourns the events beyond their control that will conspire to drive them apart.

Buy The Opposite of Amber by Gillian Philip from Australia's Online Independent Bookstore, Boomerang Books.

Book Reviews - The Opposite of Amber by Gillian Philip

» Have you read this book? We'd like to know what you think about it - write a review about Opposite of Amber book by Gillian Philip and you'll earn 50c in Boomerang Bucks loyalty dollars (you must be a Boomerang Books Account Holder - it's free to sign up and there are great benefits!)

Book Review: Opposite of Amber by Gillian Philip - Reviewed by Skye (05 Aug 2011)

This book begins with what I later find out to be a regular interlude - Counting Games, it's called - where the main focus is on the serial killer and the found victims. The first three pages did an amazing job of mysteriously yet descriptively setting the chilling tone and the scene from an omniscient perspective. I was impressed to the point of shoving the book at anyone who had the patience to humour me and read the first three pages.

I was hooked from the very start, and stayed hooked except for a few bumps along the way at colloquial Scottish phrases (I know a few Scottish people and am pretty okay with their slang most of the time. It might be a bit much at times for people who aren't familiar with it, though). It wasn't packed with action or drama but the foreshadowing tone completely ensnared me and had me feeling like at any moment something was about to tip the characters' worlds on their heads.

The writing style was amazing. I found myself at times just admiring the way the words were strung together and not taking in what they meant (but I was more than happy to reread).The way the author weaved in figurative language and recurring symbols and metaphors was superb. See the quotes I've collected below for what I mean, because my inferior writing can't do it justice.

I really liked Ruby. The book comes from her first-person perspective after the first chapter. She doesn't waste words -- to the extent where several characters remark "It talks!" when she speaks -- and is devoted to her sister, Jinn. She has flaws to add a realness and third dimension to her personality. She's stubborn, jealous, 'gauche' (in her own words). She had the feel of a real person, and even as she gets into problems that she causes herself, she's easy to feel sympathetic for her.

The Opposite Of Amber was more character-driven than plot-driven, highlighting relationship dynamics and character development. A lot of the book focuses on the relationship between Ruby and Jinn - strong initially, slowly but surely weakening as Nathan's presence plays catalyst. All of the characters were thoroughly fleshed out, to the point where you can understand and feel for characters like Nathan who you're predisposed to dislike.

Although that isn't to say that the plot wasn't compelling. It was. Suspense that the opening chapter created held and grew until the tension at the climax had my hands shaking as I hastily turned the page. The build-up was superbly written and the wind-down settled the suspense and gave hope that Ruby would get her life back on track.

The Opposite Of Amber was an emotional, chilling, and quietly intense story of the bonds between sisters and how they break.

I give The Opposite Of Amber a 6 out of 5. A new favourite of mine.

Have some of my favourite quotes from this to go:

"And to keep it right, to make it the same, he put her in the water too. Not the same water, that's true; but it's a good idea, if you don't want to leave traces, to put a girl in water. It's the opposite of amber."

"Her blonde hair was full of ice and it glittered when they pulled her out into the sun; and quite honestly, the man who found her looked so pale and drained and shocked to stillness, she looked almost better than he did."

This is Gillian Philip's second novel for Bloomsbury, her first being Crossing the Line, which was longlisted for the Carnegie Medal. Her first YA novel Bad Faith, was published by a small Scottish publishers. Gillian Philip lives in Elgin in the north of Scotland.

A Preview for this title is currently not available.
More Books By Gillian Philip
View All